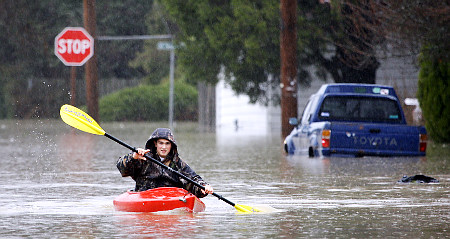 Willie Jensen, 17, paddles a kayak down a flooded street near downtown Snoqualmie, Wash. on Wednesday. Thompson/AP

Thousands of western Washington state residents were primed to evacuate their homes Thursday amid heavy flooding along the region’s rivers and streams.

A state emergency management official offered a silver lining or two, saying some rivers haven’t flooded as badly as expected. But the flooding in western Washington is a danger, a situation has been exacerbated by unseasonably high temperatures that have caused a lot of snow to melt.

He said the steady rainfall that has brought around 15 inches of rain over the last two days to some regions has come to an end. He said cooler air is moving in, and there will be some light rain that won’t affect waterways.

They are Orting, Packwood, Randle, Stanwood, Snoqualmie, Naselle, Fife, and parts of Tacoma — areas amounting to roughly 25,000 people. He said there are 20 local emergency declarations in various communities that were prompted by the recent heavy snowfall and rain.

He said there are no mandatory evacuations and no reports of fatalities.

One bit of good news is that some of the flooding was not as bad as initially thought, he said, citing the Chehalis and the Puyallup rivers.

”Life safety” is now the top concern of emergency officials, and authorities will have to wait for waters to go down before damage is assessed, Herman said.

The rain has also caused some landslides but nothing major, Herman said.

The heavy rains began on Monday and caused authorities to close a 20-mile stretch of Interstate 5 in a rural section of Lewis County.

“That’s our main corridor,” said Herman, at the center’s offices between Tacoma and Olympia, the state capital. He said it is a highly traveled stretch between Seattle and southern Washington and Oregon. 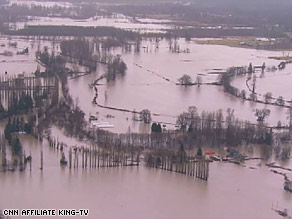 A wide swath of Pierce County is covered in water.

(CNN) — When the going got tough in flood-soaked western Washington, Loretta Cutter, administrator of a local group home and a longtime resident there, got tough … and got going.

As floodwaters from the Puyallup River threatened her town, she worked to evacuate 47 residents from the Valley Community Inn — a home for the mentally challenged and the developmentally disabled — to a church shelter. And she made sure her husband and a grandson left their one-story rambler house and got safely situated.

“It’s a situation you don’t realize you are going to be in. It’s always someone else,” Cutter told CNN on Thursday from the shelter at the Sunrise Baptist Church in Puyallup. “It was pretty traumatizing to all of us.”

Thousands in western Washington such as Cutter fled or faced the prospect of leaving their homes Thursday amid heavy flooding along the region’s rivers and streams.

The flooding conditions have been exacerbated by heavy rainfall and unseasonably high temperatures that have caused a lot of snow in the region to melt.

“It’s a very significant event,” Dana Felton, a National Weather Service meteorologist in Seattle, said of the rain and flooding.

Felton said the steady downpour that has brought around 15 inches of rain over two days to some parts has come to an end. He said cooler air is moving in, and there will be some light rain that won’t affect waterways.

The heavy rains began Monday and caused authorities to close a 20-mile stretch of Interstate 5 in a rural section of Lewis County. That closing is significant, according to officials at the Washington State Emergency Management Division.

They said the flooding and closing of the highly traveled stretch between Seattle and southern Washington and Oregon, the closure of mountain passes and the interruption of Amtrak service raises the question: “How do you get here from outside the area?” iReport.com: Are you there? Share pics, video

“The real challenge we’re facing is our transportation issue. With Interstate 5 closed, you can’t get here from Oregon,” said Bob Calkins, a spokesman for the agency.

Calkins said the heavy rain is ending and the region is experiencing the normal drizzly rainfall. He said the rivers are still high and there are some that haven’t crested yet. There are dangers of avalanches and landslides because of the soaked ground.

He said there have been at least 19 communities facing a voluntary evacuation status, a region with about 40,000 people. Residents have been anxiously debating whether to leave.

Barbara Nelson, a Pierce County emergency management spokeswoman, said crews there are most concerned with maintaining the stability of saturated earthen levees as water levels drop and checking the safety of people in areas that flooded overnight.

Nelson said crews have been ready to conduct rescues and Pierce County also has sent out automated messages informing people that it would be smart to leave their homes for safer ground. She said there are around 300 people in local shelters and shelters set up for pets and livestock.

As for Cutter, she said that the group home residents handled the overnight stay at the church well and were elated when they learned Thursday that they could return to their facility. And Cutter — who stayed up all night working — said she’s looking forward to checking out the status of her house.

“When I did tell them they were going home, they let out a big whooping yell,” Cutter said. “Everything went pretty well. We never dreamed this would happen to us.”