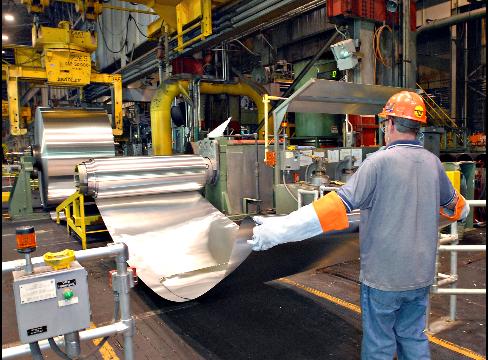 Jan. 6 (Bloomberg) — Alcoa Inc., the world’s largest aluminum maker, announced its third production cut in as many months and said it will reduce its global workforce by 13,500 in response to declining demand and prices.

The moves will lower the company’s annual smelting capacity by about 750,000 metric tons, or about 18 percent, New York-based Alcoa said today in a statement. The company also will incur charges of as much as $950 million related to restructuring costs, impairments and worker dismissals, which amount to about 13 percent of Alcoa’s employees.

“The news is pointing in the right direction, but we believe Alcoa has to take even more drastic action in cutting high-cost smelters,” Tony Robson, a Toronto-based analyst at BMO Capital Markets, said today in a telephone interview. “It’s an extremely tough metal to deal in right now with the majority of the world’s producers losing cash.” Robson rates the shares “market perform.”

Alcoa and competitors Rio Tinto Group and Century Aluminum Co. are trying to cut costs as a global economic recession reduces demand for the lightweight metal used in autos, appliances and power grids. The price of the aluminum fell 36 percent last year on the London Metal Exchange as LME- monitored inventories more than doubled to a 14-year high.

Alcoa is aiming to raise about $100 million by selling “non-core downstream businesses” including units that produce foil, auto wheels and electronic systems, the company said in today’s statement.

The charges related to the staff reductions and other restructuring costs will be $1.13 to $1.19 a share and be booked in the company’s fourth-quarter results, Alcoa said.

“This reflects what’s gone on in the economy over the past six months. These layoffs, whether it’s Alcoa or IBM, whatever, tend to lag the economy,” Walter “Bucky” Hellwig, who helps manage $30 billion at Morgan Asset Management in Birmingham, Alabama, said in a telephone interview. Hellwig doesn’t currently own Alcoa stock.

Other measures intended to conserve cash include reducing capital expenditures to $1.8 billion this year, a 50 percent decrease from 2008, and freezing hiring and salaries through 2009, the company said.

“These are extraordinary times, requiring speed and decisiveness to address the current economic downturn,” Chief Executive Officer Klaus Kleinfeld said in the statement.

Aluminum Corp. of China Ltd., that country’s biggest producer of the metal, announced on Oct. 22 it will cut 18 percent of its output. Rio Tinto, the second-largest aluminum maker, announced last month that it would slow or halt investments.

“Aluminum prices will, relatively, underperform in an eventual up-cycle as excess inventories would need to be soaked up first and the overhang of existing smelters would dampen the price recovery,” Amir Arif, an Arlington, Virginia-based analyst at Friedman, Billings, Ramsey & Co., said in a Dec. 19 note to clients.

To contact the reporter responsible for this story: Rob Delaney in Toronto at robdelaney@bloomberg.net.