Treasuries are the next bubble to burst. Inflation will skyrocket and the dollar will fail.
Compare risk and performance of Treasuries to Gold.
Got physical(!) Gold (…and Silver)? 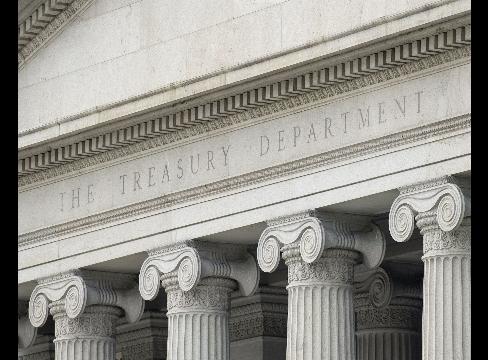 Jan. 5 (Bloomberg) — Wall Street’s biggest bond firms say Treasuries will fall for the first time in a decade as efforts to spur the economy gain traction and the flight to safety that drove the best returns in government debt since 1995 wanes.

Benchmark 10-year notes may lose 3.1 percent this year, the first loss since declining 8.3 percent in 1999, based on the median forecast of the 17 primary government security dealers that trade with the Federal Reserve. After last year’s rally, yields are so low coupon payments can’t make up for any drop in bond prices, they said.

“We could start to see stability sooner than the market would otherwise expect,” said William O’Donnell, a U.S. government bond strategist at UBS Securities LLC in Stamford, Connecticut, one of the dealers and a unit of Switzerland’s biggest bank. “As the pendulum swings from risk aversion to risk seeking that will reduce Treasury demand.”

The last time investors lost money on U.S. government bonds was the year after the 1998 bailout of hedge fund Long-Term Capital Management LP and Russia’s default sent investors rushing to Treasuries. Yields on 10-year notes rose to 6.44 percent in 1999 from 4.65 percent.

This year, 10-year notes will rise to 2.95 percent after ending at 2.21 percent in 2008, when the government had to rescue the U.S. banking system and Lehman Brothers Holdings Inc. collapsed, according to the survey. Two-year notes will increase to 1.2 percent from 0.77 percent, the dealers said. O’Donnell expects 10-year notes to jump to 2.75 percent and two-year rates to surge to 2.25 percent.

Bond firms are turning bearish because the government’s efforts to prop up the financial system and spend its way out of the worst recession in 25 years will lead to record debt sales in 2009. Returns may also be hurt in 2010 as attempts to flood the market with cash reignite inflation.

President-elect Barack Obama’s stimulus, which may total $850 billion, and the already-passed $700 billion bank-rescue bill, will force the U.S. to borrow as much as $2 trillion in the 12 months ending Sept. 30, 2009, Treasury Assistant Secretary Karthik Ramanathan said Dec. 10, citing analysts’ estimates. That compares with $892 billion in notes and bonds sold during the last fiscal year.

“We are coming with a massive supply of Treasuries and the question is who is going to own them,” said Dominic Konstam, head of interest-rate strategy at Credit Suisse Securities USA LLC in New York.

Wall Street got its forecast wrong last year. Primary dealers said 10-year yields would rise to 4.30 percent as the economy skirted a recession, according to a Bloomberg News survey.

Instead, investors piled into government debt to flee riskier assets as the economy entered its first recession since 2001, while losses and writedowns at financial companies rose to $1 trillion, according to data compiled by Bloomberg. Treasuries returned 14 percent, indexes compiled by New York-based Merrill Lynch & Co. show.

“There’s no secret that the deficit will be $1 trillion and yet still yields on T-bills are at zero,” Logan said.

Traders’ expectations for inflation over the next decade are near the lowest on record, based on the 0.11 percentage-point gap between yields on 10-year Treasury Inflation Protected Securities, or TIPS, and notes with the same maturity. The gap briefly turned negative in December as investors predicted deflation.

Investor concerns about more credit-market turmoil remain elevated even after markets calmed in November and December. Rates on three-month Treasury bills turned negative last month, falling as low as minus 0.04 percent on Dec. 4.

Three-month bill rates ended last week at 0.06 percent, compared with 3.38 percent at the start of 2008. While the difference between what it costs banks and the government to borrow for three months narrowed to 1.33 percentage points from 4.64 percentage points in September, the so-called TED spread remains above the average of 0.32 percentage point this decade before credit markets began to seize up in the second half of 2007.

Japan shows that yields can stay low even as the government steps up sales. While the country’s government bond market is the world’s biggest, at about $8.7 trillion, or more than 1.5 times gross domestic product, 10-year government bond yields are 1.17 percent. The U.S. market totals about $5.8 trillion, or 42 percent of GDP.

Policymakers in Japan drove long-term yields lower to counter deflation in the 1990s through a policy of so-called quantitative easing in which the central bank bought government securities. The Fed announced plans to buy up to $700 billion in bonds backed by home and consumer loans and said in December that it may purchase longer-maturity Treasuries.

“It’s more likely than not that they buy” Treasuries, Bruce Kasman, chief economist at JPMorgan Chase & Co. in New York, said in a Dec. 19 interview. “It will be a strategy, in a world where the economy is going to be in recession for the first half of the year, to keep long-term interest rates low.”

None of the 62 economists polled by Bloomberg a year ago expected 10-year yields to end 2008 below 3.5 percent. Rosenberg, who called the recession that was officially declared to have started in December 2007, predicted a yield of 3.7 percent.

The economy will likely shrink by 1 percent this year after expanding 1.2 percent in 2008, according to the median estimate of 58 economists surveyed by Bloomberg. By year-end, the economy may be growing at a 1.8 percent pace, the survey shows.

Unlike a year ago, the Fed has no more room to cut borrowing costs after slashing its target interest rate for overnight loans between banks to as low as zero from 4.25 percent. All of the firms surveyed expect the Fed to keep rates at the current level through 2009.

After reaching the highest yields on record relative to Treasuries in early December, investment-grade company bonds returned 6.1 percent, the best month since May 1985, while speculative-grade debt gained 6.6 percent, the most since February 1991, Merrill Lynch indexes show. Yields on Fannie Mae, Freddie Mac and Ginnie Mae mortgage bonds declined to record lows last week after the Fed announced plans to buy $500 billion of the securities sooner than expected.

Zurich-based Credit Suisse, the most bearish of the dealers, expects foreign investors that hold a majority of all U.S. government debt to buy fewer Treasuries, or even sell the securities, as the dollar depreciates, Konstam said. Ten-year yields will rise to 4.25 percent, with two-year yields reaching 1.75 percent, Konstam forecast.

China, which owns $652.9 billion of Treasuries, more than any other foreign country, cut the share of dollars in its $1.9 trillion of reserves to about 45 percent this year from more than 70 percent in 2003, Deutsche Bank AG in Frankfurt estimates.

Treasury 10-year yields may undergo a “substantial reversal” in the first quarter because past trading patterns suggest 2008’s gains are “not sustainable,” a team led by Jordan Kotick, global head of technical strategy at Barclays in New York, wrote in a research report Dec. 22.

Fund managers have never been more bearish on Treasuries, according to Ried, Thunberg & Co. The Jersey City, New Jersey- based research firm’s sentiment index fell to a record low 35 in its survey dated Jan. 5. A reading below 50 means that investors expect bond prices to fall through June.

“We are going through the worst part of the downturn,” said Michael Moran, chief economist at Daiwa Securities America Inc. in New York. “Right now there is this flight to quality happening and I think over time that will fade; interest rates will likely increase.”

Following are the results of Bloomberg’s survey, conducted from Dec. 19 to Dec. 31:

To contact the reporter on this story: Dakin Campbell in New York at dcampbell27@bloomberg.net