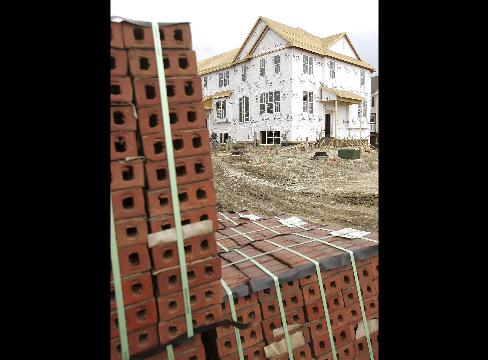 Bricks sit outside a townhouse under construction in a Lexington Homes development in Wheeling, Illinois, on Nov. 6, 2008. Photographer: Tim Boyle/Bloomberg News

Jan. 5 (Bloomberg) — The engines that have lifted the U.S. economy out of every recession since World War II will be of little help this time around.

Inventory rebuilding, household spending, home construction and payroll growth — the forces that powered, to a greater or lesser extent, each recovery since 1945 — may remain missing for much of 2009. A glut of unsold properties may keep housing depressed, while shriveled savings will discourage consumers. Companies may be reluctant to restock and rehire while their profits are squeezed.

“There are no obvious drivers of growth from the private sector,” says Jan Hatzius, chief U.S. economist at Goldman Sachs Group Inc. in New York.

The result: A recovery, whenever it comes, may be anemic and heavily dependent on low-cost lending by Federal Reserve Chairman Ben S. Bernanke and stepped-up spending by new President Barack Obama. Short-term interest rates might have to remain around zero throughout the year, while the federal budget deficit stays at or near record highs into 2010.

“If we don’t act swiftly and boldly, we could see a much deeper economic downturn that could lead to double-digit unemployment,” Obama said in his weekly radio address on Jan. 3. The jobless rate stood at 6.7 percent in November.

UBS Securities LLC forecasts that gross domestic product will contract at a 3 percent annual pace this quarter after shrinking 4.5 percent in the final three months of 2008.

James O’Sullivan, senior economist at UBS in Stamford, Connecticut, says the economy is likely to stop eroding in the second quarter, thanks to an unprecedented “policy blitz” by the Fed and the Obama administration. The second-half recovery, though, will be weak, he says: growth of 1.5 percent in the third quarter and 2 percent in the fourth, as tight credit continues to pressure consumers and companies.

That’s in contrast to past rebounds, where growth was boosted by a robust revival of private-sector demand.

Inventory swings played a key role in the 16-month recession of 1973-75 and the recovery that followed. Companies slashed stocks in 1974 and 1975 as demand dropped, and then rebuilt them rapidly the following year. That raised 1976 GDP by 1.4 percentage points, the biggest such contribution in 21 years.

Consumer spending and housing powered the economy out of recession in 1983, as pent-up demand sent purchases of cars and homes soaring. Payroll growth was also strong, with 1.1 million jobs created in September alone.

In 1992, housing again was a big help. Along with capital spending, residential construction spurred the biggest contribution to growth from investment since 1984.

Homebuilding and consumer spending played a more modest role in the economy’s revival in 2002, but that’s because they never declined in the previous year’s recession, which was the mildest since World War II.

All those factors may be missing in action this time around.

With just-in-time inventory management, the downs — and ups — of the stockpiling cycle are more muted than before. Companies are quicker to pare stockpiles when demand wanes, limiting the buildup in unwanted products both at their own sites and those of their customers.

The downside of this rapid response is that the economy won’t get as much of a pop from businesses restocking as demand recovers. “There is a lack of a big inventory cycle,” O’Sullivan says.

Companies may also be reluctant to ramp up production in the face of what many economists expect to be a slow increase in consumer demand.

Allen Sinai, chief global economist at Decision Economics in New York, says households are in hunker-down mode after suffering $10 trillion in losses in wealth from sagging home prices and shrinking investments. “They know they have to save more; they have no choice,” he says.

The Conference Board’s index of consumer confidence fell in December to the lowest level on record as anxiety about job losses overcame the beneficial effects of a 60 percent decline in gasoline prices since July.

U.S. companies cut 533,000 jobs in November, the most in 34 years. Economists surveyed by Bloomberg News forecast that figures out on Jan. 9 will show a further 500,000 reduction in payrolls in December and an unemployment rate of 7 percent.

Joblessness is likely to continue to rise throughout 2009 and perhaps into 2010. “We’ll probably have a good chance of seeing unemployment hit 9 or 10 percent,” says Kenneth Rogoff, a former chief economist for the International Monetary Fund who’s now a professor at Harvard University.

Consumers have also been shaken by the plunge in the value of homes, for many their biggest asset. Home prices in 20 major U.S. cities declined 18 percent in October from a year earlier, the biggest drop on record for the S&P/Case-Shiller index that goes back to 2001.

The collapse in property values is damping expectations for an early rebound in the housing market. “We’re in the midst of a downward spiral and the momentum is building,” Stuart Miller, chief executive officer of Miami-based Lennar Corp., which builds homes in 14 U.S. states, said on a Dec. 18 conference call.

A Glut of Properties

A glut of unsold properties is prolonging the industry’s pain. The number of previously owned homes on the market at the end of November would take 11.2 months to sell at the current pace. That’s the highest inventory level in at least 10 years.

“Housing starts and building permits are in free-fall,” Nouriel Roubini, chairman of Roubini Global Economics and a professor at New York University, said in a Bloomberg Television interview on Dec. 23. “There’s no bottom.”

Hopes that exports would buoy the economy have been dashed by the spread of the U.S. recession overseas. Japan’s economy, the world’s second-largest after the U.S., probably shrank at an annual 12.1 percent pace last quarter, the sharpest drop since 1974, according to Kyohei Morita, chief Japan economist at Barclays Capital in Tokyo.

That’s left it up to U.S. policy makers to try to pick up the slack.

The Fed cut the main U.S. interest rate to a target range between zero and 0.25 percent on Dec. 16 and pledged to do whatever is necessary to end the longest recession in a quarter century. The incoming Obama administration, meanwhile, is working on a two-year stimulus package worth as much as $850 billion in increased government spending and lower taxes.

“The U.S. is in the midst of a long, deep and severe downturn,” Sinai says. “When we do recover, the engine will be government spending, not home building or the consumer.”

To contact the reporter on this story: Rich Miller in Washington rmiller28@bloomberg.net