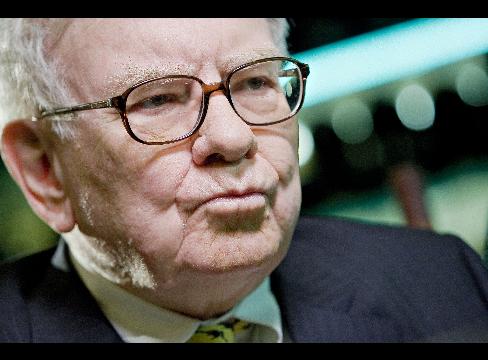 Most of the stock decline happened in the last three months as Berkshire posted a fourth straight profit drop amid sagging insurance results. The company still beat the 38 percent tumble of the Standard & Poor’s 500 Index, the 14th year in 20 that Buffett outperformed the benchmark. Just six of 1,591 U.S. stock mutual funds with at least $250 million in assets made money for investors last year, according to data compiled by Bloomberg.

“In 2008, there was nowhere to hide,” said Guy Spier, chief investment officer at Aquamarine Capital Management, which holds shares in the Omaha, Nebraska-based company. “Berkshire can’t escape the general fate of American businesses. What Buffett tries to do is ensure that Berkshire Hathaway does less badly than other companies.”

Buffett, 78, poured money into stocks as prices fell and increased Berkshire’s pace of deals as the contraction in credit markets hobbled buyout firms. Buffett spent about $3.9 billion on equities in the third quarter, making Berkshire the biggest shareholder in ConocoPhillips, the second-largest U.S. refiner. Berkshire announced 12 acquisitions in 2008, compared with eight in 2007, and also agreed to buy $8 billion in preferred shares from Goldman Sachs Group Inc. and General Electric Co.

“Buffett has the opportunity to do what he does best, which is acquire new companies at prices that have him licking his lips,” said Frank Betz, a partner at Warren, New Jersey-based Carret Zane Capital Management, which holds Berkshire shares. “I don’t think Mr. Buffett is bummed out at all.” Jackie Wilson, a spokeswoman for Berkshire, didn’t return a call seeking comment.

Most of the top holdings in Berkshire’s stock portfolio, valued at $76 billion as of Sept. 30, declined at least 15 percent in the past three months of 2008. ConocoPhillips plunged 29 percent in the fourth quarter. Coca-Cola Co., Berkshire’s top holding, dropped 14 percent, and No. 2 Wells Fargo & Co. plummeted 21 percent.

Declines in the value of derivatives also pressured Berkshire shares. Buyers of the contracts would be entitled to billions of dollars from Berkshire if four stock indexes drop below agreed-upon levels on dates beginning in 2019. Buffett said the liability on the contracts was $6.73 billion at the end of the third quarter. Berkshire has collected $4.85 billion on the contracts and can profit from investing the funds, the firm said.

All four indexes, including the Standard & Poor’s 500, would have to fall to zero for Berkshire to be liable for the entire $35.5 billion that’s at risk, Buffett said in November. Acknowledging investor concern, Buffett has said he’d provide more information on how he calculates losses on the contracts.

The firm’s annual report for 2008 will disclose “all aspects of valuation” and cover “deficiencies in the formula” for pricing the derivatives, “which we nevertheless use,” Buffett said in an e-mail sent by an assistant in November.

Buffett built Berkshire over four decades from a failing textile maker into a $150 billion company by buying out-of-favor stocks and businesses whose management he deemed superior.

Berkshire, which typically gets about half its revenue from insurance, said third-quarter profit from underwriting fell 83 percent on catastrophes including Hurricane Ike.

“A year ago, insurance prices were declining, people had capital and everyone felt good,” said David Carr, who helps manage about $400 million, including Berkshire shares, as chairman of Oak Value Capital Management Inc. “Today, it is the opposite, and with a lot of insurers’ balance sheets troubled, one could argue the future for Berkshire looks brighter.”

Competing insurers including American International Group Inc. and XL Capital Ltd. lost more than 90 percent of their market value last year on investment losses, while Berkshire was profitable through Sept. 30. Fourth-quarter results may be released next month.

“They are more cyclically sensitive than they used to be in their subsidiaries,” said Bill Bergman, an analyst at Morningstar Inc. Despite the “increasingly economically exposed subsidiaries, the difficulty in the equity markets and a tough catastrophe year, they still did well.”