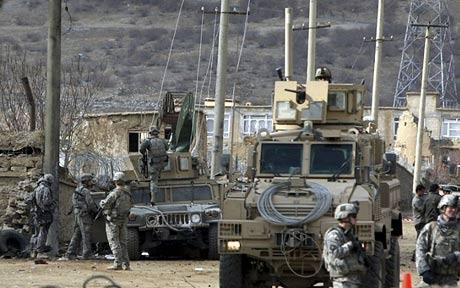 Traffic has often been suspended on this road for varying periods this year following frequent militant attacks on trucks carrying supplies to the US and NATO forces in Afghanistan.

In one of the worst such assaults earlier this month around 300 heavily-armed rebels attacked two parking bays on the outskirts of Peshawar in north-western Pakistan bordering Afghanistan and torched over 150 trucks loaded with goods and materiel like armoured vehicles and humvee jeeps.

The US and Nato are considering other possible supply routes to Afghanistan through Central Asian states to the north.

Meanwhile, the Indian army has denied amassing troops on the Pakistani border following Islamabad’s own redeployment of forces along the common frontier between the nuclear-armed neighbours following tensions over last month’s Mumbai attacks in which over 170 people were killed.

“Our forces are only vigilant so that they can be pressed into operations if the need arises” a senior army official declining to be named said in Delhi in response to Pakistani foreign minister Shah Mahmood Qureshi claims that Indian had placed its military on high alert.

“I understand India has activated their forward air bases, and I think if they are deactivated, then it will be a big positive signal” Qureshi declared on national television.

Similarly, as far as their ground forces are concerned which have been deputed and deployed, if they relocated to their peacetime positions, then it will also be a positive signal, he added days after Pakistan shifted over 20,000 troops to the Indian border, cancelled leave of all military personnel and activated its fighters.

The two sides have fought three wars and an 11-week long border skirmish since independence in 1947. They came close to hostilities in 2002 following the attack on India’s parliament which, like the Mumbai strikes were blamed by Delhi on the Pakistan-based Lashkar-e-Taiba (LeT) Islamic group.

Qureshi also offered to send a high-level delegation to Delhi to help investigate the assault in Mumbai on two hotels, a Jewish centre and the city’s main railway terminus.

Pakistan’s National Security Adviser Mahmud Ali Durrani too called for the resumption of dialogue between the neighbours to resolve issues arising out of the Mumbai attacks.

“The media has created unnecessary hype. We have to remove mistrust. We have to talk” Durrani told the CNN-IBN news channel from Islamabad. ENDS.