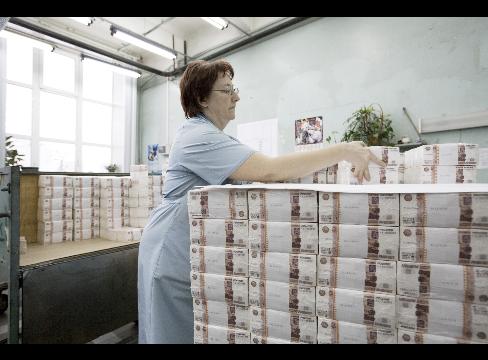 Dec. 29 (Bloomberg) — The ruble fell to a record low against the euro as Russia devalued the currency for the 12th time in seven weeks after the government forecast its first budget deficit in a decade.

The managed currency weakened 2.6 percent to 41.7245 per euro, the lowest since the European currency started trading in 1999. It fell 0.7 percent to 29.1797 versus the dollar, a four- year low. Bank Rossii allowed the ruble to fall 1.7 percent against its basket of 55 percent dollars and 45 percent euros, the most since the measure was introduced in February 2005, according to a central bank official who declined to be identified, citing bank policy.

The ruble has fallen 19 percent against the basket since Russia’s invasion of Georgia in August, to 34.8216. That five-day war, the global credit squeeze and plunging oil prices have led investors to pull more than $200 billion out of Russian investments in the last five months, according to BNP Paribas SA.

“A large part of the government’s revenues, such as oil and gas export duties and extraction taxes, is dollar-denominated, so the ruble weakening certainly helps both the budget and income statements of the oil and gas producers,” said Ronald Smith, head of research at Alfa Bank in Moscow.

Today’s decline is the 12th of more than 1 percent against the basket since Nov. 11. Russia may have to weaken the ruble another 5 percent to bring it into parity with other currencies dependant on commodity prices, such as the South African rand, Norwegian kroner and Australian dollar, Smith said.

Bank Rossii urged the country’s banks today to avoid buying foreign currencies in the first quarter of 2009 or risk losing access to central bank loans, Chairman Sergey Ignatiev said in a letter to banks that was posted on the central bank’s Web site today. Russian banks shouldn’t increase their holdings of “foreign currency assets” from the average level between Aug. 1 and Oct. 25, Ignatiev said.

The ruble may need to fall another one-fifth against the basket if oil prices don’t rise and Bank Rossii doesn’t change its policy, said Evgeny Gavrilenkov, chief economist at Troika Dialog in Moscow. Gavrilenkov called in October for a one-time depreciation of as much as 20 percent, when oil prices were above $60 a barrel.

Russia is expecting to run its first budget deficit since 1999 next year, of as much as 2 trillion rubles ($69 billion), because of lower-than-expected oil prices, Finance Minister Alexei Kudrin said on Dec. 27.

The price of Urals crude, the country’s main export blend of oil and its biggest export earner, has fallen 78 percent to about $32 a barrel since reaching a record high July 3. That’s less than half of the $70 Russia needs to balance its budget.

If oil crude falls below $30 a barrel the central bank will be forced to weaken the Russian currency to as low as 33 per dollar and 50 per euro, said Chris Weafer, chief strategist at UralSib Financial Corp. in Moscow. The ruble will probably end the year at 30 to the dollar and 43 to the euro, Weafer said.

(How will the price of oil affect the world: Lindsey Williams: The Dollar And The US Will Collapse; Saudi Arabia And Dubai Will Fall; US Will Be Third World Country; The Greatest Depression Is Coming)

The economy, which has averaged 7 percent growth since the 1998 debt default and ruble devaluation of more than 70 percent against the dollar, may slip into a recession in the first half of 2009, Kremlin economic adviser Arkady Dvorkovich told Bloomberg Television on Dec. 19.

The ruble-denominated Micex Index of 30 Russian stocks has lost 67 percent this year, heading for the biggest decline since 1998, when the ruble lost more than 70 percent against the dollar. The market value of state-run OAO Gazprom, the monopoly exporter of natural gas, has fallen to $87 billion from more than $300 billion in May.

Plunging stock prices and the seizure of capital markets has forced Russia’s richest businessmen to seek financing from state development bank Vnesheconombank, or VEB, which is channeling part of the government’s $200 billion in bailout funds. Prime Minister Vladimir Putin heads VEB’s supervisory board.

Standard & Poor’s cut Russia’s credit rating this month for the first time in nine years on concern the country is wasting its foreign currency reserves defending the currency. Russia has used about a quarter of its reserves, the world’s third largest, to defend the ruble since August. The stockpile reached a record $598.1 billion in the week to Aug. 8 and stood at $451 billion in the week to Dec. 19, the last date for which data is available.

To contact the reporter on this story: Denis Maternovsky in Moscow at dmaternovsky@bloomberg.net