Deflation? “Sure!” Just wait and see.
– The Neo-Alchemy of the Federal Reserve by Ron Paul
– Interview: Peter Schiff still grim on future
– Interview with Peter Schiff (12/13/08)

This is ‘the worst financial crisis‘ because every institution is doing its best to make it worse. 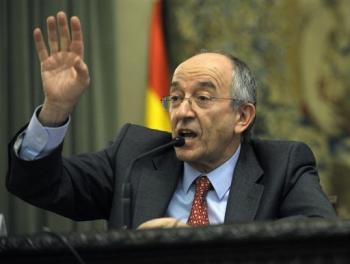 MADRID (AFP) – The governor of the Bank of Spain on Sunday issued a bleak assessment of the economic crisis, warning that the world faced a “total” financial meltdown unseen since the Great Depression.

“The lack of confidence is total,” Miguel Angel Fernandez Ordonez said in an interview with Spain’s El Pais daily.

“The inter-bank (lending) market is not functioning and this is generating vicious cycles: consumers are not consuming, businessmen are not taking on workers, investors are not investing and the banks are not lending.

“There is an almost total paralysis from which no-one is escaping,” he said, adding that any recovery — pencilled in by optimists for the end of 2009 and the start of 2010 — could be delayed if confidence is not restored.

Ordonez recognised that falling oil prices and lower taxes could kick-start a faster-than-anticipated recovery, but warned that a deepening cycle of falling consumer demand, rising unemployment and an ongoing lending squeeze could not be ruled out.

“This is the worst financial crisis since the Great Depression” of 1929, he added.

Ordonez said the European Central Bank, of which he is a governing council member, would cut interest rates in January if inflation expectations went much below two percent.

“If, among other variables, we observe that inflation expectations go much below two percent, it’s logical that we will lower rates.”

Regarding the dire situation in the United States, Ordonez said he backed the decision by the US Federal Reserve to cut interest rates almost to zero in the face of profound deflation fears.

Central banks are seeking to jumpstart movements on crucial interbank money markets that froze after the US market for high-risk, or subprime mortgages collapsed in mid 2007, and locked tighter after the US investment bank Lehman Brothers declared bankruptcy in mid September.

Interbank markets are a key link in the chain which provides credit to businesses and households.