Just as Bernard Madoff is alleged to have relied on payments in from new investors to pay out returns and promote a $50 billion (£33 billion) fund that scarcely existed, our Government continues to issue promises which it hopes future generations will honour. 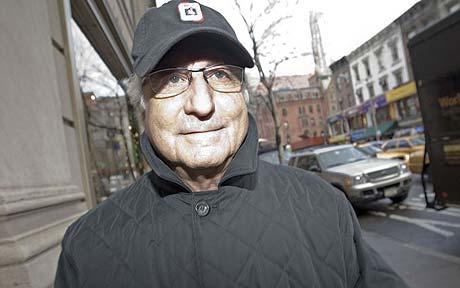 Christmas came early this week for 95,000 public sector pensioners. After questioning in the House of Commons, Cabinet Office Minister Liam Byrne admitted that they had been overpaid a total of £126m since 1978 but emphasised that they would not be required to pay the money back.

Particularly at this time of year, it makes a pleasant change to see some pensioners actually gaining from the sort of bureaucratic bungling with which we are now so wearily familiar and utterly fed up. All things considered, most people will be willing to set aside any Scrooge-like tendency to ponder upon who is paying for the politician to pose as Father Christmas.

However, a slight chill is placed on this cheery scene when you consider the uncertainty which these pensioners now face over what they will have to live on next year after their incomes are cut to the correct level. Perhaps equally galling, from the point of view of the majority who live in England, is the news from Scotland that the minority who are in receipt of overpayments north of the border will continue to be overpaid for as long as they live.

Good for them, you may very well say. After all, students receive grants in Scotland which are no longer available in England and the elderly receive free long term care up there, while means tests force tens of thousands of family homes to be sold south of the border.

English voters and taxpayers seem quite happy to put up with our Scottish rulers, Prime Minister Gordon Brown and Chancellor Alistair Darling, applying different fiscal regimes to different parts of the United Kingdom. “Yo ho ho!”, we seem to say, as they grimly raise taxes in the south and cheerily spend them in the north. Or perhaps it is all an inevitable result of having a parliament in Edinburgh as well as London.

Speaking as a deracinated Jock, I have no wish to start a row with the rest of the Cowie clan just a few days before Hogmanay. Instead, I will merely risk irritating my wife by pointing out how this case demonstrates – once again – how differently pensioners are treated in the public and private sectors. There would have been no question of airily writing off or agreeing to forget the trivial sum of £126m had the good old taxpayer not been available to pick up the bill.

Steve Bee, head of pensions at – appropriately enough – Scottish Life, told me: “These pensioners are lucky that public sector schemes are not covered by the same legislation that governs private sector schemes, which are required by law to pursue any overpayment of more than £250.

“If a private sector pension failed to pursue the overpayment – or did so unsuccessfully – then a minimum 40pc unauthorised payment surcharge would be levied by HM Revenue & Customs on the member but that could rise to 55pc.”

Over at wealth managers Hargreaves Lansdown, Tom McPhail – yes, another deracinated Jock, we really are everywhere – cites several cases where companies have pursued pensioners for overpayments and others where the Ombudsman has intervened on the side of compassion. He added: “But mistakes in the calculation of a few tens of thousands of pensions pale into insignificance when you consider this week’s estimate by the Confederation of British Industry (CBI) that public sector pensions will cost taxpayers in future £1 trillion – or £1,000 billion – to deliver.”

Regular readers will know that the explanation is these are final salary or defined benefit pensions, which are so expensive to fund that they are rapidly disappearing in the private sector. Because these public sector schemes are either inadequately funded or completely unfunded – that is, having insufficient or no money set aside to pay pensions in future – children who have not yet been born will have to pay more tax decades hence to deliver promises already made to people on the public payroll now.

Put like that, Bernard Madoff, the alleged fraudster arrested in New York this week, is nowhere near running the biggest Ponzi scheme ever; that dubious title would have to be awarded much closer to home. Just as he is alleged to have relied on payments in from new investors to pay out returns and promote a $50 billion (£33 billion) fund that scarcely existed, our Government continues to issue promises which it hopes future generations will honour. If the whole bill for public sector pension rights already accrued fell on today’s taxpayers, it would amount to £32,000 per person.

I have been banging on about this scandal for more years than I care to remember but it is good to see the CBI doing its bit to raise awareness. When I called it a form of “financial apartheid” in a journalistic attempt to turn up the volume on a complex subject several years ago, I may even have been the first to do so. Either way, it was pleasing to see Conservative leader David Cameron use that phrase when he tackled the topic last month and said the two-tier system must end.

However, as my wife – a proud civil servant – never fails to remind me when I am reckless enough to stray onto this topic, many people working in the public sector do so for modest wages and risk-free pensions help to make up for that fact. Certainly, if Mr Cameron wishes to reduce their contractual rights in any way he would have to lead by example. MPs have some of the most lavishly-funded, index-linked, final salary schemes in existence and so it would be unwise to hold your breath.

Now I think about it, when I suggested to two senior Tories that they could demonstrate the difference between them and the Government by asking for Opposition MPs’ pensions to be calculated on the same money purchase or defined contribution system which is rapidly becoming the norm for their constituents. Both MPs reacted in the same way. They laughed.

Here and now, the important point is that far too many people spend the final years of their lives in poverty. Many more will do so in future if current trends continue. Widespread and understandable cynicism about savings and investments rather misses the point that you can opt out of saving but you cannot opt out of growing old.

The Government must stop loading stealth taxes on savers – most outrageously the £5bn a year tax on retirement funds’ dividend income but also the age allowance clawback and 10pc tax trap on trivial income from deposits, described here last week.

Means-tested benefits disguised as tax credits are a pointless paperchase which fail to reach millions of those who need them most. The simplest way forward is for all pensioners to be allowed to receive tax-free income from savings. You can support our campaign by going to www.telegraph.co.uk/justiceforpensioners.

1 thought on “The biggest Ponzi scheme: Bernard Madoff’s or the British Government’s?”