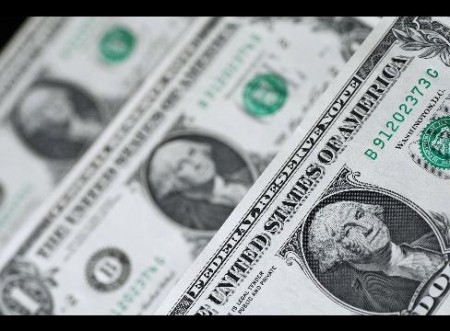 Dec. 15 (Bloomberg) — The biggest foreign-exchange strategists and investors say the best may be over for the dollar after a four-month, 24 percent rally.

The currency weakened 5.9 percent measured by the trade- weighted Dollar Index after strengthening between July and November as investors bought the greenback to flee riskier assets and repay dollar-denominated loans from lenders reining in credit. Ever since peaking on Nov. 21, the dollar fell against all 16 of the most-widely traded currencies, according to data compiled by Bloomberg.

U.S. policy makers are flooding the world with an extra $8.5 trillion through 23 different plans designed to bail out the financial system and pump up the economy. The decline shows that the increased supply of money may be overwhelming investors just as the government steps up debt sales, the trade and budget deficits grow and de-leveraging by investors slows.

“The dollar will go to new lows as the U.S. attacks its currency,” said John Taylor, chairman of New York-based FX Concepts Inc., which manages about $14.5 billion of currencies.

Citigroup Inc., Goldman Sachs Group Inc., BNP Paribas SA and Bank of America Corp. predict further weakness. Last week was the first time in almost a month that consensus estimates for the dollar against the euro through 2009 fell, according to the median forecast of 47 strategists surveyed by Bloomberg.

Taylor, whose firm manages the biggest hedge fund focusing on foreign exchange, said while the dollar may strengthen next year, it will fall to a record low against the euro in 2010 and to a 13-year low of 80 per yen as soon as 2009.

Speculation that the dollar has peaked gained steam last week as the currency plunged 4.9 percent against the euro to $1.3369, its biggest drop since Europe’s common currency was created in 1999. It weakened 1.75 percent versus the yen.

“We’re at a turning point in terms of dollar dynamics,” said Jens Nordvig, a New York-based strategist at Goldman Sachs, the biggest U.S. securities firm to convert to a bank. “The dollar shortage has been addressed and we’ll see people start to focus on other things and those are all dollar negative.”

After rising from $250 billion in September and October, dollar cash positions at U.S.-based banks have stayed at about $800 billion since Nov. 1, according to Nordvig.

A survey last month by New York-based Sanford C. Bernstein & Co. found that 63 percent of hedge-fund managers said they are about half done selling securities to reduce their use of borrowed money after financial companies cut back on credit following almost $1 trillion in writedowns and losses since the start of 2007. Twenty-three percent said they were three- quarters finished.

Goldman Sachs says the dollar may weaken to $1.45 per euro by the end of next year. Up until Dec. 11, the firm forecast that it would end 2009 at $1.30. The median estimate in a Bloomberg survey is for the currency to finish next year at $1.25.

Dollar bulls say it’s a mistake to bet against the currency now because Treasury yields are falling to record lows even as the government prepares to sell more than $1 trillion of debt, a sign there’s no end in sight to demand for the safest U.S. assets. They also say the yen, which typically rallies as risky assets decline, is appreciating.

“The yen’s strength falls into our theory that the risk- aversion trade is not off the table,” said Peter Rosenstreich, chief market analyst at Geneva-based currency trading firm ACM Advanced Currency Markets. “The fact that the yen continues to gain strength validates our theory in the longer term, the dollar safe-haven trade is not done yet.”

Robert Sinche, the head of global currency strategy at Bank of America in New York, the third-largest U.S. bank, says the dollar is bound to weaken because investors are starting to focus on traditional measures of value such as relative interest rates, budget deficits and trade balances.

As more loans are repaid, there is less need for dollars, forcing investors to value the currency on metrics such as relative interest rates, budget deficits and trade balances. By those measures, the greenback should weaken, according to Sinche.

“A lot of the reasons why the dollar went up are not sustainable and have started to disappear,” said Sinche, who predicts the currency will weaken to $1.44 per euro as early as March 31. “Bad news about the U.S. economy is beginning to be bad news for the dollar.”

The Federal Reserve will cut its target rate for overnight loans between banks in half to 0.5 percent on Dec. 16, the lowest level since 1958, according to the median estimate of 84 economists in a Bloomberg survey. The European Central Bank’s target rate, currently 2.5 percent, will bottom in 2009 at 1.75 percent, according to a Bloomberg survey of economists, making the euro relatively more attractive.

“The government and the Fed cannot continue to talk about trillions of dollars of financing and expansion of the Fed’s balance sheet without the dollar going south,” Gross said in a Dec. 10 interview with Bloomberg Television

Spending to shore up the financial system caused the U.S. government’s budget deficit for the first two months of fiscal 2009 that started in October to balloon to $401.6 billion, the Treasury Department said Dec. 10.

“It’s absolutely going to get worse before it gets better,” said Michael Englund, chief economist at Action Economics LLC in Boulder, Colorado. “We’re looking at a $1 trillion deficit, and that’s before the next stimulus package. If Treasury spends all of TARP, it could be $1.2 trillion to $1.3 trillion.”

The $700 billion Troubled Assets Relief Program is one of the programs set up by the government and the Fed to try to bring the economy out of the worst recession since World War II. President-elect Barack Obama also plans a stimulus package that House Speaker Nancy Pelosi said may total $500 billion to $600 billion.

The dollar’s rally may have hurt the trade balance, and earnings of companies that depend on sales overseas. U.S. exports slid to a seven-month low in October, causing the trade deficit to swell to $57.2 billion, the Commerce Department said Dec. 11. American exports dropped 2.2 percent to $151.7 billion as foreign purchases of U.S. aircraft, automobiles, chemicals and food waned. The trade gap was projected to be $53.5 billion.

The U.S. economy may contract 3.9 percent this quarter and 2 percent in the first three months of 2009, according to the median estimate in a Bloomberg poll.

“Rapid deterioration in the U.S. economy, coupled with the adverse effects of monetary and fiscal stimuli, do not bode well for the dollar,” Citigroup strategists Todd Elmer, Michael Hart, James McCormick and Aerin Williams wrote in a report from New York on Dec. 12. The New York-based bank “foresees short- term dollar weakness, against both Group of 10 and emerging- market currencies,” they wrote.

Paris-based BNP Paribas, Europe’s third-largest bank, recommends buying the euro versus the dollar amid signs that equity markets may be stabilizing. The MSCI World Index is up 16.6 percent since falling to a 5 1/2-year low on Nov. 21, the same day the Dollar Index peaked.

“With equity markets broadly stable with a positive bias and volatility easing, we expect the euro-versus-dollar declines to be capped at the $1.28” level, a team of strategists headed by Hans-Guenter Redeker in London wrote in a report Dec. 10.

Like Goldman Sachs, London-based Barclays Plc, the U.K.’s third-biggest bank, forecasts the dollar will weaken to $1.45 per euro by the end of 2009, according to data compiled by Bloomberg. New York-based Morgan Stanley strategists Stephen Jen and Spyros Andreopoulos, who in August advised clients to buy the dollar, said in a Dec. 11 report that the currency may strengthen in the first half of 2009, before “underperforming most other currencies” as the global economy recovers.

“We’re seeing that correlation between equities and the dollar break down,” said Adam Boyton, a senior currency strategist in New York at Deutsche Bank AG, the world’s biggest currency trader, according to a 2008 Euromoney Institutional Investor Plc survey. “The fact that the dollar is weakening in this environment probably tells you a bit more focus is coming back on the fundamentals of the U.S. economy.”

To contact the reporters on this story: Bo Nielsen in Copenhagen at bnielsen4@bloomberg.net; Daniel Kruger in New York at dkruger1@bloomberg.net