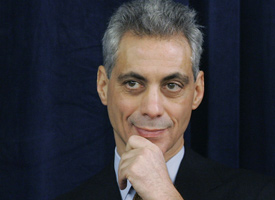 Since Rahm Emanuel was appointed the next White House chief of staff last month, we’ve been retracing his previous life as an investment banker, which earned him more than $18 million in less than three years.

Today the New York Times sheds new light on Emanuel’s Wall Street days — and how they helped send him to Congress.

“I had this idea that this could work and that it had upside,” Wasserstein told the Times. “It worked out better than I could have hoped.”

Indeed, as we previously noted, Emanuel used his political connections to broker major deals while at the firm. (One deal was a $16 billion merger that created Exelon Corp., now one of the nation’s largest electric utilities. Another involved SBC Communications, the telecommunications company run by William Daley, Clinton’s commerce secretary and the brother of Chicago’s mayor.)

After leaving the bank in 2001 to run for Congress, Emanuel benefited from the sale of Wasserstein Perella, which gave him an unusually large payout. Russ Gerson, global head of financial markets for A.T. Kearney Executive Search, told the Chicago Tribune in 2003 that Emanuel’s compensation would put him “in the top 3 to 5 percent” of investment bankers at that time.

The cash proved helpful when Emanuel found himself in a tough fight for a seat in Congress. He contributed $450,000 out of his own pocket to the primary campaign, and his leading rival accused him of trying to buy his seat, the Times reports.

After Emanuel left banking to run for Congress, members of the securities and investment industry became his biggest backers, donating more than $1.5 million to his campaigns dating back to 2002, according to the Center for Responsive Politics.

Mr. Emanuel also leaned heavily upon the industry while he was chairman of the Democratic Congressional Campaign Committee during the 2006 midterm elections. Financial industry donors contributed more than $5.8 million to the committee, behind only retirees.

Once he reached Congress, Emanuel served on the Financial Services Committee, which handles legislation involving financial markets and banks.

Neither the Times nor anybody else has suggested Emanuel went on to do the bidding of the financial industry. But there’s little question his days as a banker have helped shape Emanuel’s perspective. From the Times:

Former colleagues said the insight it afforded him on the financial services sector is invaluable especially now. But Mr. Emanuel built up strong ties with an industry now at the heart of the economic crisis, one that will be girding for a pitched lobbying battle next year as the incoming Democratic administration considers a potentially sweeping regulatory overhaul.

Friends of Mr. Emanuel’s from his private-sector days said he still checks in with them regularly to plumb their insights on economic issues.

In an interview with the Times, Emanuel said he often acted against the wishes of the financial industry. “I would say I’ve been as tough on my friends as others,” he said. “I call it like I see it.”