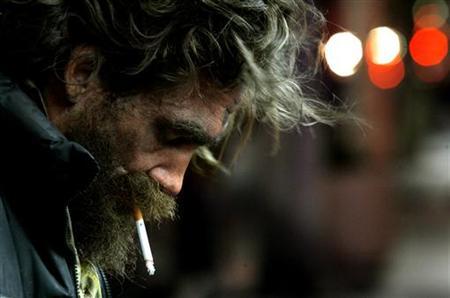 A homeless man smokes a cigarette on Hollywood Boulevard in Hollywood in this January 27, 2006 file photo. Homelessness and demand for emergency food are rising in the United States as the economy founders, a report said on Friday, and homeless advocates cautioned many cities were not equipped for the increase. REUTERS/Mario Anzuoni

BOSTON (Reuters) – Homelessness and demand for emergency food are rising in the United States as the economy founders, a report said on Friday, and homeless advocates cautioned many cities were not equipped for the increase.

A survey by the U.S. Conference of Mayors showed that 19 of 25 cities saw an increase in homelessness in the 12 months to October, while four reported a drop and two cities lacked enough data for conclusive results.

On average, the cities in the survey saw a 12 percent rise in homelessness, the report said. Although the results do not cover all U.S. cities, homeless advocates said they were in line with anecdotal evidence nationwide.

Homeless advocates say families are flooding homeless shelters across the United States in numbers not seen for years, camping out in motels or staying with friends and relatives following foreclosures on tens of thousands of homes during the worst financial crisis since the Great Depression.

“It’s very depressing because we have been making progress in getting it down in the past couple of years,” Nan Roman, president of the Washington-based National Alliance to End Homelessness, said in an interview.

Demand for emergency food assistance rose in 20 of the 25 cities surveyed, the report added.

The report marks a reversal from a U.S. government survey released in July that showed the number of chronically homeless Americans declining by 15 percent to about 1.6 million people from October 1, 2006, through September 30, 2007.

“We’re seeing a new trend and I would expect the number to rise substantially,” Roman said, noting a usual lag between when a family crisis occurs and when homelessness begins.

She said the strain on budgets from the yearlong recession could make it difficult for cities to handle the increase.

Philip Mangano, the homelessness czar appointed by President George W. Bush in 2002, praised the mayors’ report and said it would be a mistake to wait for conclusive figures when there was clear evidence of an unfolding crisis.

“There is a crisis around families falling out into homelessness,” he said.

He said the government under September’s Housing and Economic Recovery Act had made $3.92 billion available to mitigate the effect of mortgage foreclosures and 25 percent of that was targeted at the lowest-income neighborhoods, where people are most vulnerable to homelessness.

San Francisco, among the nation’s priciest housing markets, reported the largest spike in homelessness in the survey with a 50 percent increase. Gastonia, North Carolina, where foreclosures have been rising, saw a 46 percent rise.

Los Angeles, Phoenix, Miami and Cleveland were the only cities to report a decrease in homelessness.

Sixteen cities reported an increase in the number of families at homeless shelters, while two saw a decrease, four reported no change and three said they did not have enough data to answer the question, according to the survey.

President-elect Barack Obama has spoken broadly about boosting affordable housing and restoring public housing subsidies but he has said little about how he will help low-income families made homeless by a worsening economy.

Homeless advocacy groups have called for targeted housing subsidies that help homeless families get back into more permanent accommodation as well as helping those on the brink of foreclosure.