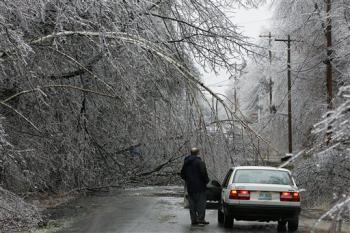 Car and driver are stopped in Derry, N.H. on a road littered with fallen trees and wires after an overnight ice storm Friday, Dec. 12, 2008. The ice storm knocked out power to more than a half-million homes and businesses in New England and upstate New York, and authorities say it could take days for all of them to get service back. (AP Photo/Cheryl Senter)

CONCORD, N.H. (AP) – An ice storm knocked out power to more than a million homes and businesses in New England and upstate New York on Friday, and authorities say it could take days for all of them to get service back.

The storm brought rain, freezing rain, sleet and snow through the night, and in some areas, including hard-hit New Hampshire, the miserable mix was continuing Friday.

The governors of Massachusetts and New Hampshire declared states of emergency Friday morning, and schools were closed and travel disrupted across the region. New Hampshire’s court system canceled all hearings and trials for the day.

Fire departments were responding to reports of transformer explosions, wires and utility poles down and trees falling on homes. Utility crews were so busy dealing with public safety hazards like live power lines that they weren’t immediately able to begin restoration efforts.

Utilities reported 392,000 homes and businesses without power in New Hampshire, including 300,000 served by the state’s largest utility, Public Service Company of New Hampshire. The outages there far surpassed the infamous ice storm of 1998, when some residents spent more than a week in the dark.

In Hampstead, N.H., Mark Cegelis, 36, said things were hectic at his neighborhood gas station, which was jammed with people trying to get gas for home generators.

“It’s kind of lawless out there right now. There’s a lot of people very frustrated, stacking up at the gas stations. It’s pretty ugly.”

He bought 21 gallons for himself and tried to deliver some to some friends in Derry but couldn’t get there because of downed trees blocking roads. So his friends came to him instead, and were expected to hunker down until power was restored.

Gov. Deval Patrick’s emergency declaration in Massachusetts would enable the governor to take further steps, such as mobilizing the National Guard, if needed as the day wore on, officials said.

At a midmorning news conference, Patrick said 350,000 customers across the state were without power – and the number had risen 150,000 homes in just an hour. He said it would be “ambitious” to think power would be restored by Monday.

“This is not going to be a couple of hours,” Patrick said. “It’s likely to be several days.”

In eastern New York, particularly around Albany, the state capital, outages at National Grid and other utilities brought the total in the state to more than 235,000.

“Trees were down on all the roads,” said Miguel Figueroa, 28, as he waited for coffee at a Starbucks in Colonie, N.Y. “… I couldn’t even get on the Thruway today.”

At least 20 Massachusetts towns declared local states of emergency even before the governor made the statewide declaration.

“Stay home if you live in Holden, don’t come to Holden if you work here,” Holden, Mass., fire Chief Jack Chandler said. The entire town was without power and some senior citizens on oxygen were transported to a hospital or a shelter opened at the town’s senior center.

In Vermont, 25,800 customers were without power Friday morning. Several inches of snow, caked with ice toppled trees onto roads and power lines.

The ice even extended to a small area of Pennsylvania, where about 4,700 PPL Corp. customers, most of them in the Poconos, were without electricity. In most of the state, though, the storm system left its mark in the form of heavy rain or rain changing to snow.