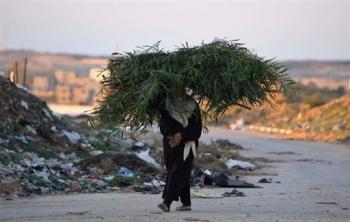 A Palestinian woman carries branches to be used as cooking fuel

TEHRAN (AFP) – Iran’s Red Crescent announced on Wednesday that it is sending a relief ship to the Gaza Strip, in the face of an Israeli blockade of the Hamas-ruled territory.

“We are sending a consignment of a 1,000 tonnes on a ship to Gaza the beginning of next week,” Red Crescent secretary general Ahmad Moussavi was quoted as saying on the organisation’s website.

“There is the possibility of our ship being blocked just as the Libyan ship was blocked,” he added referring to a vessel intercepted by Israel a month ago.

Libya protested to the UN Security Council over Israel’s interception of the cargo ship, which had sought to take 3,000 tonnes of humanitarian aid to Gaza.

Israel said that because Libya does not recognise it, the interception was justified on grounds of national security.

“Unfortunately so far the Egyptian government had not allowed us to send the relief items to them by air,” Moussavi said, referring to Gaza’s southern neighbour

The Israeli embargo was imposed after the Islamist Hamas seized power in Gaza in June 2007. The blockade has been tightened since the start of November in retaliation for rocket fire on southern Israel.

Tehran is a staunch supporter of Hamas and has rejected all allegations that it is supplying arms to the movement, saying it only provides moral backing.

Iranian President Mahmoud Ahmadinejad has repeatedly called for Israel to be wiped off the map and even called the Jewish Holocaust a “myth.”