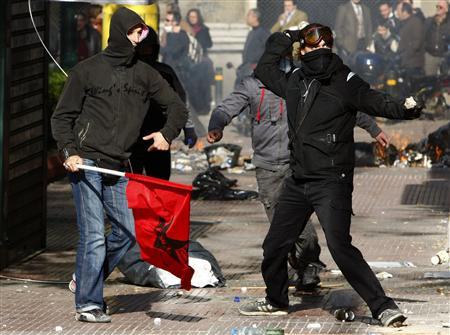 ATHENS (Reuters) – Protesters threw fire bombs at police outside parliament on Wednesday during a general strike which paralyzed Greece and piled pressure on a conservative government reeling from the worst riots in decades.

Prime Minister Costas Karamanlis announced financial support for businesses damaged in five days of rioting. He also pledged to safeguard people from violence, but did not say how.

Government sources have denied rumors emergency measures were being considered.

“Government murderers!” demonstrators shouted, furious at the shooting of a teenager by police on Saturday which sparked riots fueled by simmering public anger at political scandals, rising unemployment and poverty.

Witnesses said the officer who fired the shot took deliberate aim, but his lawyer said on Wednesday a ballistics report showed the boy was killed by an accidental ricochet.

“The investigation shows it was a ricochet … In the end, this was an accident,” lawyer Alexis Kougias told Reuters. The ballistics report has not yet been officially published.

Riots have raged in at least 10 cities and the cost of damage to shops and businesses in Athens alone is estimated at about 200 million euros ($259 million), the Greek Commerce Confederation said.

“In Athens, we had 565 shops suffering serious damage or being completely destroyed,” said Vassilis Krokidis, vice president of the federation.

In a televised message, Karamanlis announced subsidies, loans and tax relief measures to help those affected.

“The government is determined not only to make citizens feel safe but to support businesses which suffered damage,” he said.

Thousands marched on parliament on Wednesday in a union rally at economic and social policy, which quickly turned violent. Police fired teargas and protesters responded with stones, bottles and sticks, a Reuters witness said.

Under Greece’s constitution, the government can impose a ban on public assembly if it threatens public security and socio-economic life. Government sources have denied such a plan.

The opposition socialist party has said the government, which has a one-seat majority and trails in opinion polls, has lost the trust of the people and has called for elections.

“Participation in the strike is total, the country has come to a standstill,” said Stathis Anestis, spokesman for the GSEE union federation which called the 24-hour stoppage.The opposition socialist party, which has overtaken the ruling conservatives in opinion polls, has called for elections.

“I appeal to all to show responsibility, restraint and to end the violence that our country is experiencing these days,” Papandreou told a conference.

One policeman has been charged with murder over the shooting of Alexandros Grigoropoulos, 15.

He testified on Wednesday before a prosecutor that he had fired in the air.

“The investigation shows it was a ricochet … in the end, this was an accident,” his lawyer Alexis Kougias told Reuters. The ballistics report has not yet been officially published.

Witnesses told TV stations after the shooting that the policeman had aimed at the boy and fired.

Rioting over the boy’s death began in Athens on Saturday and quickly spread across the European Union nation of 11 million people. Greeks also protested in Paris, Berlin, London, The Hague and in Cyprus. The unrest is the worst in Greece since the aftermath of military rule in 1974.

Wednesday’s strike by GSEE and its public sector counterpart ADEDY, which include half of Greece’s 5-million-strong work force, was the latest in a series of labor protests by unions.

Many shops in central Athens stayed shut, boarding up their windows to prevent further damage. Bus stops and litter bins were blackened by fire, public telephone booths smashed and some buildings gutted by blazes.

Greece has a tradition of violence at student rallies and firebomb attacks by anarchist groups.