A BOFFIN too busy to find real love has INVENTED his idea of the perfect woman – a female ROBOT. 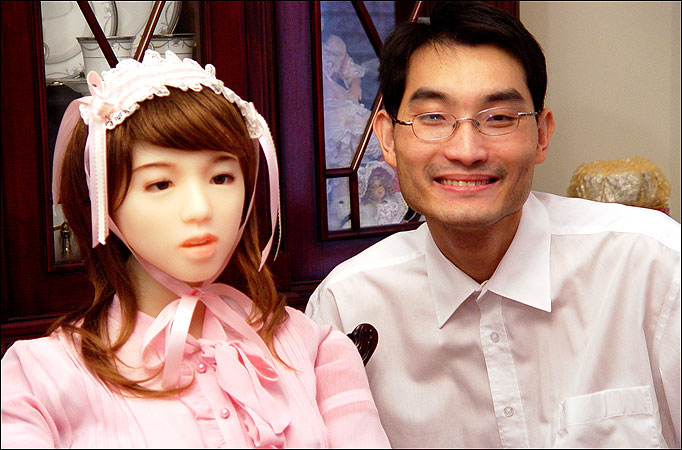 She even remembers his favourite drink and does simple cleaning and household tasks.

Le, a scientific genius from Brampton in Ontario, Canada, said he never had time to find a real partner so he designed one using the latest technology.

He said he did not build Aiko as a sexual partner, but said she could be tweaked to become one. 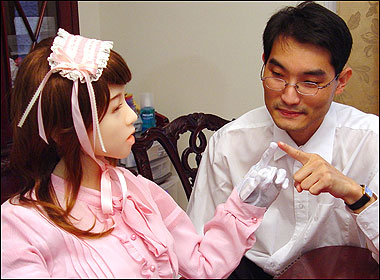 “Her software could be redesigned to simulate her having an orgasm and reacting to touch as if she is playing hard to get or being straight to the point,” he said.

The former software programmer has taken out credit cards and loans, sold his car and spent his life savings on perfecting the machine.

“I want to make her look, feel and act as human as possible so she can be the perfect companion,” said Le.

The odd looking pair go out for drives together in the Canadian countryside, before sitting down at the dinner table, but Aiko never eats anything.

Le said: “So far she can understand and speak 13,000 different sentences in English and Japanese, so she’s already fairly intelligent.

“When I need to do my accounts, Aiko does all the maths. She is very patient and never complains.”

The fem-bot has a touch-sensitive face and body so she reacts if shown affection or hurt.

“Like a real female she will react to being touched in certain ways. If you grab or squeeze too hard she will try to slap you. She has all senses except for smell,” he said.

Le, a child genius who was put in a class for talented youngsters, made his first robot when he was just eight years old.

He began work on Aiko two years ago in the home he shares with his brother.

But the stress of working on such a difficult project became too much for Le and he suffered a mild heart attack in November last year.

“It was shocking to have a heart attack at the age of 33,” he admits. “But the doctors said I’d been doing too much.

“I may need to have Aiko look after me one day.

“She doesn’t need holidays, food or rest and she will work almost 24-hours a day. She is the perfect woman,” he said.

“People have mixed reactions when they meet Aiko,” he said.

“They either love or hate her. Some people get angry and accuse me of playing God. Once someone threw a rock at Aiko. That really upset me.

“But many people are fascinated by her.

“Women are generally impressed and try to talk to her. But the men always want to touch her, and if they do it in the wrong way they get a slap.”

1 thought on “Fem-bot’s my love machine”