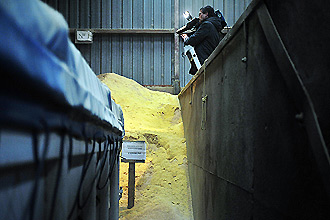 Deliveries from China have been subjected to rigorous tests since the EU issued an alert last October recommending countries tighten controls on produce from China. (AFP)

RENNES – ALMOST 300 tonnes of soymeal from China, used to feed organic poultry in western France, were taken off the market on Friday after testing positive for a toxic chemical, an import company said.

The soymeal contained melanine – the chemical at the heart of a scandal in China over contaminated milk – 50 times over the recommended limit.

‘One of the three imported batches, was carrying 116mg/kg of melamine, while the average should be 2,5 grammes. All foodstuffs made from the same materials were taken off the market at the beginning of November,’ Mr Christophe Carousse from the French farm cooperative told AFP.

Other untested batches where delivered to some 127 organic farms in the Loire region in western France.

‘Tests on meat, pork and egg-laying chickens show there is no danger to public health. Unlike dioxin, melamine does not build up in the body. There is no way of catching it through the food chain,’ veterinary expert Frederic Andre told AFP. (Hmmh.)

In the wake of the discovery, French Health Minister Roselyne Bachelot scheduled health security talks for Wednesday. They will focus on the quality of products imported into France, in particular those from China.

Deliveries from China have been subjected to rigorous tests since the EU issued an alert last October recommending countries tighten controls on produce from China.

The scandal is the latest to rock China’s food industry, which has been tarnished by a series of health scares over dangerous products in recent years.

In September, baby milk powder contaminated with melamine killed four babies in China. Tens of thousands of infants fell ill in a health scare that prompted a nationwide investigation into the extent of the problem.

Melamine, which is used for making plastics and glues, was blamed for causing kidney stones in the affected babies, a condition normally rare in infants, but which gives rise to a range of health risks. (AFP)