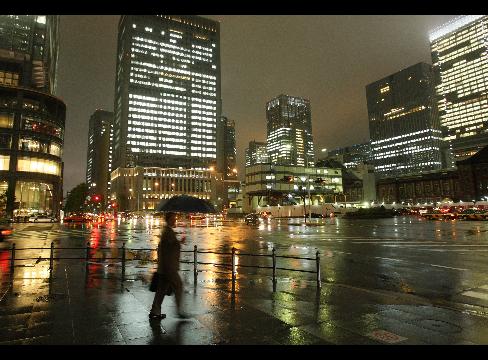 Dec. 9 (Bloomberg) — Japan’s economy shrank in the third quarter faster than the government initially estimated, after businesses cut spending and slashed inventories in anticipation of a prolonged recession.

Japan’s first recession since 2001 is deepening as companies including Canon Inc. and Toyota Motor Corp. cut production, jobs and spending. The central bank’s Tankan survey next week will probably show sentiment among large manufacturers fell the most in 34 years, economists predict.

“Big Japanese companies are panicking about the global export market,” said Graham Davis, director of the Economist Intelligence Unit in Tokyo. “There’s almost no good news out there.”

The yen traded at 92.85 per dollar at 10:04 a.m. in Tokyo from 93.04 before the report. Japan’s currency has surged 14 percent against the dollar since September, adding to exporters’ woes by eroding the value of their profits made abroad.

The Tankan index of confidence among big manufacturers will plunge to minus 23 points in December from minus 3 points three months earlier, according to the median estimate of 22 economists surveyed by Bloomberg News. The Bank of Japan will release the quarterly survey on Dec. 15.

From the second quarter, the economy shrank 0.5 percent, more than the 0.1 percent initially reported. Economists expected a 0.2 percent contraction.

Canon, which is predicting its first full-year profit drop since 2000, said last month it will delay construction of a 100 billion yen ($1.1 billion) printer-cartridge factory in Oita Prefecture, southwestern Japan, as global demand slows. Toyota may lower its operating profit forecast because of weaker sales and the stronger yen, the Yomiuri newspaper reported today, without citing anyone.

On a nominal basis, which excludes adjustments for inflation, the economy shrank 0.7 percent from the previous quarter. The GDP deflator, a broad measure of price changes, fell 1.6 percent.

The recession has taken a toll on Prime Minister Taro Aso, whose approval rating has dropped to below that of his predecessor Yasuo Fukuda when he was forced to step down three months ago. The ruling coalition, which faces elections by September, may propose spending an extra 20 trillion yen ($215 billion) during the next three years to spur the economy, the Yomiuri said today.

Inventories accounted for 0.2 percentage point of the contraction, the biggest drag on the revised figures, as companies reduced stockpiles to avoid a glut should demand continue to fall, said Seiji Adachi, a senior economist at Deutsche Securities Inc. in Tokyo. Companies last month said they planned to cut production at the fastest pace in 35 years.

“Industrial production will show a very serious decline in coming months,” said Hiroaki Muto, a senior economist at Sumitomo Mitsui Asset Management Co. in Tokyo, who predicts the slowdown to continue until late 2009. “The pace of the downturn is accelerating worldwide.”