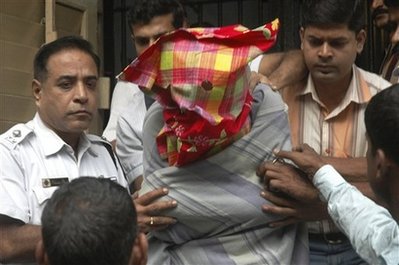 A man with his face covered, identified by the police as Mukhtar Ahmed, appears at a court in Calcutta, India, Saturday, Dec. 6, 2008. Police arrested two Indian men accused of illegally buying mobile phone cards used by the gunmen in the Mumbai attacks, police said Saturday, the first known arrests since the bloody siege ended. According to police, Ahmed allegedly bought SIM cards from Tauseef Rahman who was also arrested by the police.
(AP Photo)

CALCUTTA, India – One of the two men arrested for illegally buying mobile phone cards used by gunmen in the Mumbai attacks is a counter-insurgency police officer who may have been on an undercover mission, security officials said Saturday.

The officials in Indian Kashmir demanded that police in Calcutta, where the suspect is being held, arrange for his quick release.

Only two people have been arrested since the end of the bloody siege that killed 171 people. Indian officials have blamed the attacks on Pakistani extremists.

A senior police official in Indian Kashmir said one of them, Mukhtar Ahmed, is part of a semiofficial counter-insurgency network whose members are usually former Kashmiri militants.

Calcutta police have been told Ahmed is “our man and it’s now up to them how to facilitate his release,” said the officer, who spoke on condition of anonymity due to the sensitivity of the information.

Rahman, of West Bengal state, later sold them to Ahmed, Kumar said. Both men were arrested Friday and charged with fraud and criminal conspiracy.

The SIM cards were later used by the gunmen. Police said they were still investigating how the 10 gunmen obtained the SIM cards, and declined to offer more details.

Most large Indian cities, including Calcutta, where the SIM cards were purchased, have thriving black markets for mobile phone cards and cheap phones.

Indian authorities believe the banned Pakistani-based militant group Lashkar-e-Taiba, which has links to Kashmir, trained the gunmen and plotted the attacks.

Police, meanwhile, also said an Indian man arrested in February in northern India carrying hand-drawn sketches of Mumbai hotels, the train terminal and other sites that were later attacked, was being brought to Mumbai for renewed questioning.

They are hoping the man, Faheem Ansari, can shed more light on the attacks.

Rakesh Maria, a senior Mumbai police officer, said he believed there was a definite connection between Ansari and the Mumbai attacks.

“Ansari was trained by Lashkar and sent to do reconnoissance,” Maria said.

The interrogation of the lone surviving gunman from the Mumbai attacks, Mohammed Ajmal Kasab, 21, revealed that the gunmen had detailed pictures of the locations, Maria said.

“They were pretty elaborate photographs,” he said, adding that they had also used maps from Google to study the targets.

News of the February arrest has added to a torrent of criticism about missed warnings and botched intelligence.

“There have been lapses. I would be less than truthful if I said there had been no lapses,” Chidambaram told reporters Friday.

The minister, who assumed his post just days ago following the ouster of the previous minister in the attack’s aftermath, spoke as Prime Minister Manmohan Singh pressed the assertion that Pakistani extremists were behind the attack.

Kasab, the surviving gunman, told interrogators he had been sent by Lashkar and identified two of the plot’s masterminds as being involved, two Indian government officials familiar with the inquiry said. Police had earlier identified the prisoner as Ajmal Amir Kasab.

Lashkar changed its name to Jamaat-ud-Dawa after it was banned in 2002 amid U.S. pressure, according to the U.S. State Department. The U.S. lists both groups as terrorist organizations.

Hafiz Mohammed Saeed, who heads Jamaat-ud-Dawa – though U.S. authorities in May described him as the overall leader of Lashkar-e-Taiba – denied in an interview that there was a Pakistani hand behind the attacks. He called on Indian authorities to act like “a responsible country.” Saeed is considered the founder of both groups.

“I can say with authority that the Lashkar does not believe in killing civilians,” Saeed told Outlook magazine in an interview released Friday.

Kasab told police that a senior Lashkar leader, Zaki-ur-Rehman Lakhvi, the group’s operations chief, recruited him for the attack, and that the assailants called another senior leader, Yusuf Muzammil, on a satellite phone before the attacks.

In Pakistan, the Interior Ministry chief told reporters he had no immediate information on Lakhvi or Muzammil.

According to the U.S., Lakhvi has directed Lashkar operations in Chechnya, Bosnia and Southeast Asia, training members to carry out suicide bombings and attack populated areas. In 2004, he allegedly sent operatives and funds to attack U.S. forces in Iraq.

Lashkar, outlawed by Pakistan in 2002, has derived some of its funding from organizations based in Saudi Arabia and Kuwait, with its leaders making fundraising trips to the Middle East in recent years, U.S. officials say.