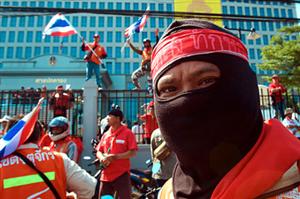 The public siege of its airports may be over, but the country’s political crisis is just heating up.

Last week, after Thailand’s high court disbanded the country’s ruling party and antigovernment demonstrators finally ended their weeklong occupation of Bangkok’s two airports and their three-month siege of Government House, weary stranded travelers could have been forgiven for thinking that the political crisis was over. The estimated 350,000 foreigners who’d been trapped by the blockage have begun their journeys home. Yet for Thailand’s citizens, its politicians, its business community and its foreign investors, nothing concrete has been resolved. Thailand remains a nation divided. Its beloved 81-year-old king, Bhumibol Adulyadej, is in decline and had to unexpectedly cancel his annual birthday speech last Thursday due to illness. King Bhumibol had never previously missed his birthday address, and his absence dashed hopes that he would use the occasion to help resolve the crisis. Instead, political extremism is now mounting, and a frightening new phrase has slipped into the political lexicon: civil war.

Most analysts acknowledge that a civil conflict in the strict military sense-with rival armies fighting over territory and national control-is unlikely. Yet a uniquely Thai version, featuring extreme political violence and dividing the nation into rich vs. poor, urban vs. rural, north vs. south and pro- vs. antiglobalization, has already begun to play out. Its salient aspects include a winner-take-all political culture, a rising authoritarian bent among the country’s traditional elite and the erosion of democratic institutions. “Who will fight? All of the above,” warns Sunai Phasuk, Thailand representative for Human Rights Watch. “It will be both a horizontal and vertical conflict, like a football game that goes very nasty and eventually the crowd jumps in.”

That football match reached fever pitch last week when, for the second time in three months, Thailand’s constitutional court toppled a democratically elected government. A nine-judge panel removed Prime Minister Somchai Wongsawat from office, dissolved three political parties central to his coalition and banned a handful of top officials for allegedly permitting fraud during the December 2007 election. The ruling came just three months after the same court ousted then Prime Minister Samak Sundaravej for briefly hosting a televised cooking show while in office (which violated a no-moonlighting rule he was unaware of). The latest decision was an attempt to strike out at “dishonest political parties [that] undermine Thailand’s democratic system,” said Court President Chat Chalavorn. Critics called the decision a “judicial coup.”

The new verdict was widely anticipated, partly because Thailand’s judiciary is increasingly seen as a tool of an old ruling troika comprised of the military, the monarchy and the Bangkok-based national bureaucracy. Since democracy was restored last year, the judiciary has flagged the government for even the tiniest infractions while refusing to rein in an antigovernment pressure group calling itself the People’s Alliance for Democracy as it sought to impose mob rule. In August, the PAD’s yellow-clad supporters occupied the prime minister’s office, and late last month they shut down both of Bangkok’s civilian airports. Yet the judiciary did nothing. It is also legally proscribed from bringing criminal charges against any participant in the 2006 coup that ousted populist firebrand Thaksin Shinawatra from power. Michael Montesano, a visiting research fellow at the Institute of Southeast Asian Studies in Singapore, says Thai politics have polarized to such an extreme that even the king-who intervened to stop political violence in 1992-might be unable to broker a lasting truce this time. “That’s not how Thailand works anymore,” he argues. “Each side sees so little reason to compromise that any deal wouldn’t last very long.”

The roots of today’s strife stretch back to 2000, when tycoon turned politico Thaksin engineered a sweeping election triumph by pledging to elevate the country’s rural majority out of poverty. Once in office, he funded village-level development projects, offered nearly free health care and made Thailand’s economy the envy of the region by delivering high growth and reducing the income gap. His economic model played well in the largely rural country and made Thailand an emerging-market star, yet Thaksin’s populism, charisma and superior political skills also made him powerful enemies among Thailand’s traditional power brokers: the military, Bangkok’s political clans, the business elite and the monarchy. Those groups supported Thaksin’s 2006 ouster “because the logical conclusion of his programs would be a transformation of Thailand’s sociopolitical hierarchy [that] would threaten many, many people close to the top,” says Prof. Thitinan Pongsudhirak, director of the Institute for Security and International Studies at Chulalongkorn University in Bangkok.

More than two years later, the old elite is still struggling to exorcise Thaksin’s ghost. The man himself now lives in exile in Dubai to avoid jail following his conviction this year on corruption charges. But he speaks frequently to supporters by video link and claims fealty from the coalition elected in a landslide in late 2007 led by remnants of his Thai Rak Thai Party. Now officially banned twice, it has again begun to reconstitute itself, this time as Puea Thai, and likely will maintain its sway over Parliament’s powerful lower house. This resilience has broken a historical pattern whereby democratic movements crushed by Thailand’s military stayed down. “The rural grassroots have been awakened,” says Thitinan, “and they are not going back to sleep.”