HONG KONG – The chairman of China’s sovereign wealth fund said on Wednesday that China had no plans for further investments in Western financial institutions, nor did it have any plans to “save” the world through economic policies. 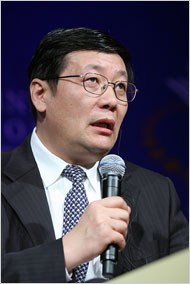 The comments by Lou Jiwei, the chairman and chief executive of the China Investment Corporation, are the clearest signal yet that after taking heavy losses on initial investments in the Blackstone Group, Morgan Stanley and Barclays, state-run Chinese institutions have no appetite for further purchases in this sector.

“Right now we do not have the courage to invest in financial institutions because we do not know what problems they may have,” Mr. Lou said as part of a panel discussion on the second and final day of the Clinton Global Initiative conference here.

Asked whether China might pursue economic policies aimed at saving the world, Mr. Lou said that the country’s leaders had a narrower focus. “China can only save herself because the scale of China is still rather small,” he said, adding that while China has more people than any other country, economic output is still low enough that the Chinese economy is not yet big enough to have a big effect on the global economy.

“If China can do a good job domestically, that is the best thing it can do for the world,” he said.

Mr. Lou’s comments represent the clearest statement yet that as global financial markets plunge and economies slow, the attention of China’s leaders is turning inward.

For several months, there has been a noticeable difference between East and West in expectations of China. Financiers in the United States and Europe have frequently talked of ways to use China’s $1.9 trillion in foreign exchange reserves to rescue Western banks, most recently with speculation that the China Investment Corporation might invest more money in Morgan Stanley, which ended up turning to Mitsubishi UFJ Financial Group of Japan instead.

But financial leaders in Hong Kong, Beijing and Shanghai, with closer links to decision makers in Beijing, have consistently maintained that having been burned on their initial financial sector investments, the Chinese are very leery of buying more. Mr. Lou confirmed this.

Similarly, Western economists have hoped that China will try to take the lead in rekindling economic growth around the world with heavier spending. But while China has already announced plans for a stimulus plan of $586 billion, most of that money is earmarked for the construction of highways and railroads, categories in which China’s need for imports is fairly limited.

President Hu Jintao warned at a government meeting last weekend that difficulties in the global economy threatened to undermine growth in China.

Laura Tyson, who served as chairwoman of the Council of Economic Advisers under President Clinton, said at the same panel as Mr. Lou that the current crisis would give further impetus to Asia’s rise in economic importance.

“It’s going to accelerate the move of economic power to Asia,” she said. “It was under way before, but this will accelerate it.” The China Investment Corporation has $200 billion and was initially expected to invest all of it overseas. But the fund has since made its largest investments shoring up the capital of banks in China.

Mr. Lou said that the sheer pace of new initiatives and new rules issued by Western regulatory agencies was disconcerting and made it even harder for him to choose worthwhile investments. “If it is changing every week, how can you expect me to have confidence?” he asked.

He did not rule out overseas investments, however, noting that, “Right now, the value of many investments is underestimated.” But he suggested that China might find some of its best opportunities in low-income countries. “We don’t want to look at only the advanced or developing countries, we also want to look at emerging markets.”

The China Investment Corporation’s first investment, in the Blackstone Group, has fared badly and attracted considerable criticism within China. The sovereign wealth fund paid $3 billion at $29.605 a share; the shares closed on Tuesday in New York at $5.34, for a loss of $2.46 billion, or 82 percent.

The China Investment Corporation also had heavy losses on its investment a year ago in Morgan Stanley, while value of the China Development Bank’s stake in Barclays has plunged.

Like many Chinese officials lately, Mr. Lou expressed concern about rapidly slowing growth in American purchases of Chinese goods, which has led to large-scale layoffs at export-oriented factories in China, particularly in the Pearl River delta region near Hong Kong. He blamed a shortage of letters of credit from American banks, which he described as making it hard for American importers to obtain the money they need to buy Chinese goods even when they have ready buyers.

“Citibank, Morgan Stanley and the government, they are very tight on their credit, so even when there is demand, they can’t make things happen,” he said.