A stroke victim has regained the power of speech after doctors placed a device resembling a teabag filled with stem cells in his brain. 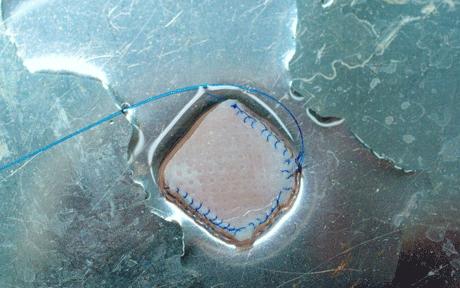 Genetically modified stem cells fitted into a kind of ‘tea bag’ are implanted to the patient’s brain where they are supposed to have an anti-inflammatory effect Photo: EPA

Walter Bast, 49, also regained the use of his right arm after the revolutionary treatment, which prevents brain cells from dying.

If further trials of the treatment are successful, it could be on the market in as little as five years, providing fresh hope for the 45,000 Britons each year who suffer a haemorrhagic stroke, where a blood vessel in the brain bursts.

Currently, the only option is surgery, which has a variable success rate. Half of surgery patients will die within a month and just one in 20 patients will recover to the extent of Mr Bast.

The pioneering treatment, called CellBeads, involves cutting away part of the skull to tie off leaking blood vessels and remove blood from the brain.

Surgeons then insert the 2cm by 2cm ‘teabag’ filled with capsules stuffed with around a million stem cells.

The stem cells, taken from bone marrow, have been genetically engineered to make a drug known as CM1 that protects brain cells from dying. This lets the cells rejuvenate and repair the damage done by the stroke.

After around two weeks, doctors at the International Neuroscience-Institute in Hanover, Germany, removed the ‘teabag’, resulting in Mr Bast regaining his speech and the use of his right arm.

Speaking a week after the operation, the first of its kind in the world, Mr Bast, a mechanic, said: “I feel a lucky guy.”

The so-called CellBeads treatment is the brainchild of scientists at the British medical technology firm Biocompatibles International, based in Farnham, Surrey.

The stem cells are encapsulated in beads to hide them from the immune system and ensure they are not rejected by the body.

Enclosing everything in the 2cm square ‘teabag’ ensures the surgeon can easily remove it at the end of the treatment period.

Mr Bast, who lives near Bremen in Germany, agreed to be the first to test the operation after suffering two strokes in quick succession.

His surgeon, Professor Thomas Brinker, said: “We see a recovery as good as this in only the minority of patients, so it is an encouraging start. It is important that we found no side-effects.”

Dr Peter Stratford, of Biocompatibles, said a one-size-fits-all treatment could be stored in hospital freezers ready for use when required.

If effective, it could have a huge impact on patients’ quality of life and save the NHS billions.

But stem cell scientists warned that many safety and ethical hurdles would have to be crossed before the treatment was accepted for widespread use.

Haemorrhagic strokes account for around 30 per cent of the 150,000 strokes in the UK each year.

Stroke is Britain’s third biggest killer, after heart disease and cancer, and causes more disability than any other disease. It costs the economy about £7 billion a year, including NHS bills and lost productivity.