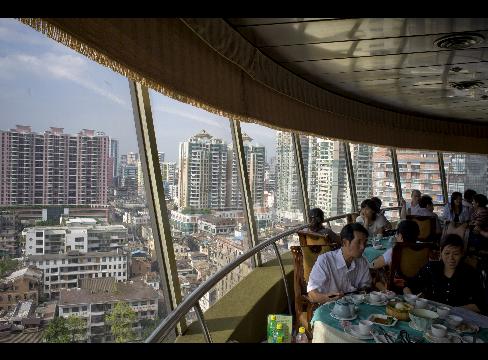 Dec. 2 (Bloomberg) — House prices in Shanghai, Shenzhen and Guangzhou are plunging, and the global economy may grind almost to a halt next year because of it.

Construction of homes, offices and factories fell at least 16.6 percent in October after rising 32.5 percent a year earlier, according to Macquarie Securities Ltd. That’s squeezing an economy already slowed by recessions in the U.S., Japan and Europe that have cut demand for exports. Building is the biggest driver of China’s expansion, contributing a quarter of fixed- asset investment and employing 77 million people.

The central bank cut its key interest rate by the most in 11 years last week and the government said “forceful” measures were needed to arrest a faster-than-expected economic decline. Without more rate cuts and government spending, China is unlikely to contribute the 60 percent of global growth Merrill Lynch & Co. forecasts for next year, further slowing the world economy.

“China is now at the heart of the global slowdown,” said Jim Walker, chief economist at Asianomics Ltd., an economic advisory firm in Hong Kong. “It means that global growth is probably going to be dragged down close to zero next year.”

Walker, voted best regional economist in an Asiamoney magazine brokers’ poll for 11 years through 2004 when he worked for CLSA Asia Pacific Markets, estimates China will grow zero to 4 percent next year, with a 30 percent chance of a contraction.

In 2005, China vaulted past the U.K. to become the world’s fourth-largest economy, after expansion averaged 9.9 percent annually for the previous 30 years. GDP has increased 69-fold since Deng Xiaoping began free market changes in 1978. China accounted for 27 percent of global growth last year.

The World Bank last week slashed its forecast for China’s expansion next year to 7.5 percent, the slowest in almost two decades, from 9.2 percent in the previous quarterly report, saying the country could no longer rely on overseas consumers.

China’s export orders and output shrank in November by the most since records began as the global financial crisis sapped demand for the nation’s toys, textiles and computers.

Exports and property together have contributed about half of the expansion in China’s GDP, estimates Shanghai-based Andy Xie, an independent analyst who was formerly Morgan Stanley’s chief Asia economist.

“That growth is gone,” he said. “Can the government make it up with something else? It’s going to be tough.”

Merrill’s forecast of 1.5 percent global growth next year is based on an 8.6 percent expansion in China. The prediction on Nov. 21 came 12 days after China announced a 4 trillion yuan ($586 billion) stimulus plan, mostly for public works projects.

“In order to curb an excessive economic slowdown, we must adopt forceful measures that have a noticeable impact,” said Zhang Ping, chairman of China’s top economic planning agency, on Nov. 27. “Some economic indicators weakened further in November, showing a faster decline.”

President Hu Jintao on Nov. 30 said the economic slump is a test of his administration’s ability to govern.

The government is trying to limit fallout from the slowdown for fear that rising unemployment may lead to social unrest. Police and security guards last week attempted to breakup demonstrations by fired workers who overturned a police car, smashed motorbikes and broke company equipment in southern Guangdong province, the state-run Xinhua news agency reported.

A second stimulus package to boost consumption may be imminent, the Beijing-based Economic Observer reported Nov. 24. Measures being considered include raising income-tax thresholds, higher salaries for state workers and increased subsidies for low-income groups, the newspaper said, citing people involved in discussion of the plan.

China has room to spend even more than already announced because it has debt equal to 15.7 percent of gross domestic product — compared with 75 percent in India — a budget surplus and the world’s largest currency reserves at $1.9 trillion, said Lu Ting, a Hong Kong-based economist with Merrill Lynch.

Shanghai house prices fell 19.5 percent in the third quarter from the previous three months, according to real estate broker Savills Plc. Declines in apartment values are accelerating in Shenzhen and Guangzhou, two of the fastest growing cities in Guangdong province, which produces 30 percent of China’s exports.

Construction will contract 30 percent next year after expanding 9 percent in the first three quarters of 2008, according to Macquarie Securities.

‘Property Is the Epicenter’

“If real estate contracts by 30 percent it doesn’t matter how much the government spends on infrastructure, the economy is still going to be very weak,” said Paul Cavey, a Hong Kong-based economist at Macquarie who forecasts a 6.6 percent expansion next year. “Property is the epicenter of economic weakness.”

“China is a huge source of demand for commodities, and now its slowdown is a key reason behind the collapse of commodity prices,” said Nicholas Lardy, a senior fellow at the Washington- based Peter G. Peterson Institute for International Economics. “It’s experiencing the sharpest deceleration of economic growth since reforms started 30 years ago.”

Steel prices in China have tumbled because of the slowdown in construction, which accounts for 38 percent of demand, according to Jing Ulrich, chairwoman of China equities at JPMorgan Chase & Co. Spot prices of hot-rolled sheet have plunged almost 40 percent since the end of June to 3,594 yuan a ton.

Zhengzhou-based Bayannur Zijin Nonferrous Co. is reducing zinc output by 30 percent as demand for the metal declines, it said Nov. 19. Zinc, which is used as a protective coating for iron and steel used to build homes and make cars, has tumbled 49 percent this year on the London Metal Exchange.

For every 1 percentage point growth in China’s economy, the rest of Asia will be boosted by half that, says Huang Yiping, chief Asia economist at Citigroup Inc. in Hong Kong.

Countries with the most at stake are Taiwan, which shipped almost 36 percent of its exports to China last year; South Korea, 25 percent; and Japan, 19 percent, according to UBS AG.

Taiwan’s export orders from China and Hong Kong dropped 23 percent in October, the biggest decline since 2001, the government reported Nov. 24.

Concern over a slowdown spurred China to cut interest rates by 1.89 percentage points since September and end restrictions on bank lending. To encourage home sales it trimmed mortgage rates, taxes and down-payments for first-time home buyers.

That’s a U-turn from the first half, when Central Bank Governor Zhou Xiaochuan was focused on fighting inflation that rose to a 12-year high of 8.7 percent in February. It dropped to 4 percent in October.

The slump in residential and commercial building may undermine efforts to buoy the economy.

“The global financial crisis won’t get China to zero percent growth and neither will recession in developed economies,” said Tao Dong, chief Asia economist at Credit Suisse in Hong Kong. “If there’s a collapse in the property market that might do the job.”

To contact the reporter on this story: Kevin Hamlin in Beijing at khamlin@bloomberg.net