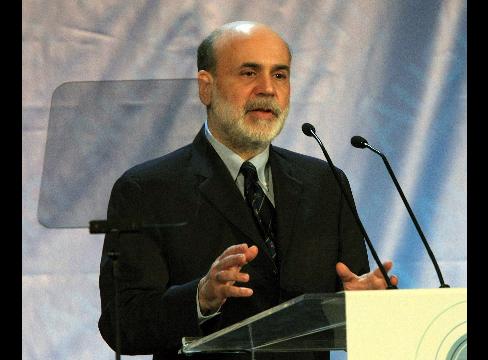 Dec. 2 (Bloomberg) — Federal Reserve Chairman Ben S. Bernanke signaled he’s ready to dig deeper into the central bank’s toolkit after cutting interest rates almost as much as he can, opening the door to a shift by policy makers this month.

Bernanke yesterday said he may use less conventional policies, such as buying Treasury securities, to revive the economy, because his room to lower the main U.S. rate from the current 1 percent level is “obviously limited.” Even so, reducing the rate is “certainly feasible,” he said.

Policy makers may decide at their next meeting Dec. 15-16 on the details of carrying out such a shift, which might resemble the “quantitative easing” strategy the Bank of Japan pursued in 2001-2006 after driving interest rates close to zero. The Fed chief’s readiness to rely more on adding reserves to the banking system prompted JPMorgan Chase & Co. economist Michael Feroli to refer to him as “Bernanke-san” in a note yesterday.

“This sets the stage for the Federal Reserve to be more formal in its adoption of quantitative easing,” said Vincent Reinhart, the Fed’s director of monetary affairs until last year and now a scholar at the American Enterprise Institute in Washington.

The Bank of Japan is the only major central bank in modern times to rely on quantitative easing — the strategy of injecting more reserves into the banking system than needed to keep the target interest rate at zero.

Steps Bernanke has taken so far have prompted some Fed officials and economists to say the central bank is already pursuing such a policy. With an array of emergency-loan programs aimed at easing the worst credit crisis in seven decades, Bernanke has expanded the Fed’s balance sheet to $2.11 trillion as of last week, more than double the year-earlier level.

Bank of Japan Governor Masaaki Shirakawa said in May that while the strategy “was very effective in stabilizing financial markets,” it had “limited impact” in remedying Japan’s economic stagnation because banks wouldn’t lend and companies wouldn’t borrow.

Bernanke himself didn’t use the quantitative easing term in his remarks yesterday to the Austin, Texas, Chamber of Commerce. If he does officially adopt the new approach, it will require a change in the way the policy-making Federal Open Market Committee conducts its business, Reinhart said. The FOMC, which currently votes on the level of interest rates, may now find itself debating the size of the Fed’s balance sheet and struggling to find ways to communicate that decision to financial markets, he said.

Investors didn’t immediately take to the prospect of a new strategy yesterday. While Treasuries extended gains after Bernanke’s remarks, stocks slid the most since October, wiping out more than half of last week’s rally. The Standard & Poor’s 500 Index sank 8.9 percent to 816.21, with financial stocks in the index tumbling a record 17 percent as a group.

The Fed chief’s comments coincided with the determination by economic scholars yesterday that the U.S. recession began one year ago this month. That declaration came from a committee of the National Bureau of Economic Research, a private, nonprofit group based in Cambridge, Massachusetts.

The U.S. economy “will probably remain weak for a time,” even if the credit crisis eases, Bernanke said yesterday in his speech. While the Fed can’t push interest rates below zero, “the second arrow in the Federal Reserve’s quiver — the provision of liquidity — remains effective,” he said.

One option is for the Fed to buy “longer-term Treasury or agency securities on the open market in substantial quantities,” Bernanke said. “This approach might influence the yields on these securities, thus helping to spur aggregate demand.”

Should purchases of Treasuries fail to accomplish the Fed’s goals, “there’s very much a likelihood that they could expand the range of assets that they buy,” said former Atlanta Fed research director Robert Eisenbeis, now chief monetary economist at Cumberland Advisors, in an interview with Bloomberg Television.

At the same time, aiming to increase loans when banks still need to rid their balance sheets of bad assets “is a bit myopic,” Eisenbeis said. “They’re not going to expand lending when they’ve got a problem of leverage.”

Last week, the Fed announced two new programs aimed at unfreezing credit for homebuyers, consumers and small businesses. Those include a commitment to buy as much as $600 billion of debt issued or backed by government-chartered housing-finance companies and a $200 billion initiative to support consumer and small-business loans.

The Fed’s balance sheet “will eventually have to be brought back to a more sustainable level,” Bernanke said. “However, that is an issue for the future; for now, the goal of policy must be to support financial markets and the economy.”

To contact the reporter on this story: Scott Lanman in Washington at slanman@bloomberg.net.