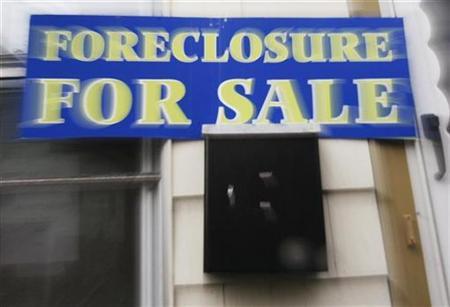 A sign reading ‘Foreclosure For Sale’ is posted on a house in the Boston suburb of Dedham, Massachusetts March 15, 2007. REUTERS/Brian Snyder

WASHINGTON (Reuters) – Poverty in the United States is spreading from rural and inner-city areas to the suburbs, according to a study, a situation that can worsen as the economy confronts what may be a protracted recession.

The study by the Federal Reserve’s Community Affairs department and the Brookings Institution Metropolitan Policy Program found that poverty levels in the world’s richest nation were on the rise.

“It shows that concentrated poverty is still very much with us, and that it can be found among a much more diverse set of communities and families than previous research has emphasized,” said Bruce Katz, a director Brookings Institution Metropolitan Policy Program.

“Poverty is spreading and may be re-clustering in suburbs, where a majority of America’s metropolitan poor now live.”

The study was released ahead of next week’s conference on concentrated poverty at the Fed. It shied away from explaining the causes of poverty, but past research have linked the phenomenon to loss of jobs in manufacturing, agriculture and mining.

With the U.S. economic outlook rapidly deteriorating, poverty could get worse.

The U.S. housing market collapse has unleashed the worst financial crisis since the Great Depression, forcing business to scale back on investments and driving the unemployment rate to a 14-year high.

Data on Tuesday showed the U.S. economy contracted 0.5 percent in the third quarter, its fastest pace in seven-years, with consumer spending dropping to a 28-year low.

Many analysts believe the United States already has joined Europe in recession, though it will take another quarter of contraction to meet a widely used definition for it — back-to-back quarters of declining output.

The study noted that a strong economy had helped to reduce the incidence of concentrated poverty across the United States, but the process might have stalled during the current decade.

“While the case studies in this report point to unique factors that accompanied rising poverty in each of these communities, the negative consequences ring familiar across places, big and small … African American, white, Latino and Native American.