Gold is poised for a dramatic surge and could blast through $2,000 an ounce by the end of next year as central banks flood the world’s monetary system with liquidity, according to an internal client note from the US bank Citigroup. 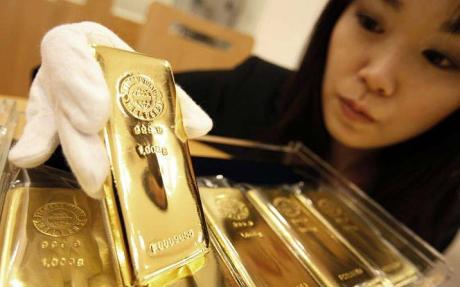 An employee of Tanaka Kikinzoku Jewelry K.K. displays a gold bar at the company’s store in Tokyo Photo: Reuters

The bank said the damage caused by the financial excesses of the last quarter century was forcing the world’s authorities to take steps that had never been tried before.

This gamble was likely to end in one of two extreme ways: with either a resurgence of inflation; or a downward spiral into depression, civil disorder, and possibly wars. Both outcomes will cause a rush for gold.

“They are throwing the kitchen sink at this,” said Tom Fitzpatrick, the bank’s chief technical strategist.

“The world is not going back to normal after the magnitude of what they have done. When the dust settles this will either work, and the money they have pushed into the system will feed though into an inflation shock.

“Or it will not work because too much damage has already been done, and we will see continued financial deterioration, causing further economic deterioration, with the risk of a feedback loop. We don’t think this is the more likely outcome, but as each week and month passes, there is a growing danger of vicious circle as confidence erodes,” he said.

“This will lead to political instability. We are already seeing countries on the periphery of Europe under severe stress. Some leaders are now at record levels of unpopularity. There is a risk of domestic unrest, starting with strikes because people are feeling disenfranchised.”

“What happens if there is a meltdown in a country like Pakistan, which is a nuclear power. People react when they have their backs to the wall. We’re already seeing doubts emerge about the sovereign debts of developed AAA-rated countries, which is not something you can ignore,” he said.

Gold traders are playing close attention to reports from Beijing that the China is thinking of boosting its gold reserves from 600 tonnes to nearer 4,000 tonnes to diversify away from paper currencies. “If true, this is a very material change,” he said.

Mr Fitzpatrick said Britain had made a mistake selling off half its gold at the bottom of the market between 1999 to 2002. “People have started to question the value of government debt,” he said.

Citigroup said the blast-off was likely to occur within two years, and possibly as soon as 2009. Gold was trading yesterday at $812 an ounce. It is well off its all-time peak of $1,030 in February but has held up much better than other commodities over the last few months – reverting to is historical role as a safe-haven store of value and a de facto currency.

3 thoughts on “Citigroup says gold could rise above $2,000 next year as world unravels”