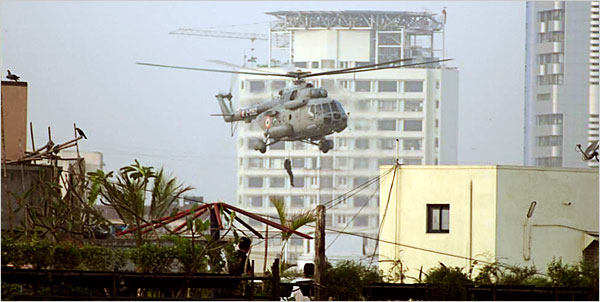 A commando rappelled from a helicopter near Nariman House, where militants are believed to be hiding, in Mumbai on Friday. Peter Keep/Reuters

MUMBAI, India – As the crisis in Mumbai approached its third day, Indian commandos fought running battles with militants on Friday, still struggling to end the murderous assault on India’s financial capital that has shaken the nation and raised perilous regional tensions with neighboring Pakistan.

Two Americans were confirmed killed, among a total of at least eight foreigners who the Indian authorities said had died during the attacks. In addition, five bodies of Israeli citizens were removed from a Jewish center, Chabad House, after Indian commando units stormed the attackers inside the building, Israeli officials said. The terrorists had executed the hostages during the commando raid, the Indian military said.

Shortly before night settled over the stricken city, the police said the death toll had reached 143 with the discovery of 24 bodies in the luxury Oberoi hotel, where the police had finally taken control and many guests were set free on Friday.

But the army’s operation at a second luxury hotel, the Taj, was only entering its “final phase,” according to the Indian military, with commandos battling one terrorist left inside who the army said was moving between two floors of the hotel, including an area that had been a dance floor for weddings and other parties. The army said two other terrorists had been killed overnight in the Taj hotel.

In the Oberoi, some guests were still barricaded in their rooms as security forces reasserted control of the hotel, and they were watching events outside on television news channels. But police and military officers did not explain why the operation to flush out a handful of assailants in the Taj hotel and the Jewish community center had taken so long.

At the Jewish center, commandos slid down ropes from a hovering Army helicopter on Friday morning as they stormed the building. The blue-uniformed troopers landed on the roof and soon made their way inside the center, home to the Hasidic Jewish group Chabad-Lubavitch.

Throughout Friday, a gun battle raged inside the Jewish center, which echoed to the thump of explosions and the rattle of automatic fire. Later, Reuters reported that the commandos had blown up the outer wall of the center, and that the bodies of five hostages were discovered, quoting an Israeli diplomat speaking on Israeli television.

Indian security forces claimed success in rescuing scores of guests and killing two assailants at the five-star Oberoi hotel but still appeared to be encountering resistance inside the ornate, turreted Taj Mahal Palace and Tower Hotel.

The hotels and the Jewish center were among several locations hit by the attackers late on Wednesday, including the main train station, a hospital, a cinema and a historic cafe. An American spiritual group, the Synchronicity Community, said two of its members identified as Alan and Naomi Scherr, had been killed at the Oberoi hotel.

While there was still no definitive word on the identity or affiliation of the attackers, an Indian official said one assailant had been captured alive and was a Pakistani citizen.

The assertion, by R.R. Patil, the home affairs minister of Maharashtra State, where Mumbai is located, could further increase tension between India and Pakistan, both nuclear-armed states which have fought wars in the past. In a significant development, Pakistan said on Friday it was prepared to send its intelligence chief, Ahmed Shuja Pasha, to India to share information in the investigation into the attacks.

In London, officials said they were unable to confirm reports in a British newspaper that some of the attackers held British passports, which are relatively common among people with ties to former British colonies.

The main success of the day for the authorities came at the Oberoi hotel where police said that 93 foreigners – some of them wearing Air France and Lufthansa uniforms – had been rescued on Friday. Exhausted survivors offered harrowing accounts of their ordeal, trapped on the upper floors of the high-rise hotel occupied on lower floors by gunmen.

The Mumbai police chief, Hassan Ghafoor, said 24 bodies had been found at the hotel.

At the Taj hotel , several trucks carrying Indian commandos arrived at 1:15 p.m. on Friday. The troopers appeared to be starting an assault on the hotel, where an army official said at least one militant was still holding hostages. Throughout Friday, explosions and small arms fire were heard from the hotel as security forces sought to free hostages. But progress seemed cautious and slow. Outside the hotel, an Indian army sniper took up position in a cherrypicker. By late afternoon, smoke had again begun to billow from the roof of the hotel, parts of which were gutted by a huge blaze after the gunmen first moved into the hotel on Wednesday. And by nightfall, explosions and gunfire continued to shake the building.

The leader of a commando unit involved in a gun battle Thursday morning inside the Taj said during a news conference on Friday that he had seen a dozen dead bodies in one of the rooms.

His team also discovered a gunman’s backpack, which contained dried fruit, 400 rounds of AK-47 ammunition, four grenades, Indian and American money, and seven credit cards from some of the world’s leading banks. They pack also had a national identity card from the island of Mauritius, off Africa’s southeastern coast.

The attackers were “very, very familiar with the layout of the hotel,” said the commander, who disguised his face with a scarf and tinted glasses. He said the militants, who appeared to be under 30 years old, were “determined” and “remorseless.”

On Thursday, the police said 14 police officers had been killed in the city, along with nine gunmen. Nine suspects were taken into custody, they said.

In a televised speech Thursday, Prime Minister Manmohan Singh blamed forces “based outside this country” in a thinly veiled accusation that Pakistan was involved. A day later, India’s foreign minister Pranab Mukherjee was quoted by the Press Trust of India as saying that, according to preliminary reports, “some elements in Pakistan are responsible.”

But Pakistan seemed anxious to defuse the mounting crisis in relations with its neighbor. Foreign Minister Shah Mahmood Qureshi said India and Pakistan should join hands to defeat a common enemy, and urged New Delhi not to play politics over the attacks in Mumbai, Reuters reported.

“Do not bring politics into this issue,” the Pakistani foreign minister told reporters in the Indian town of Ajmer during a four-day visit to India. “This is a collective issue. We are facing a common enemy and we should join hands to defeat the enemy.”

President Asif Ali Zardari called Mr. Singh, Reuters reported, to say he was “appalled and shocked” by the terrorist attacks. “Non-state actors wanted to force upon the governments their own agenda, but they must not be allowed to succeed,” he said.