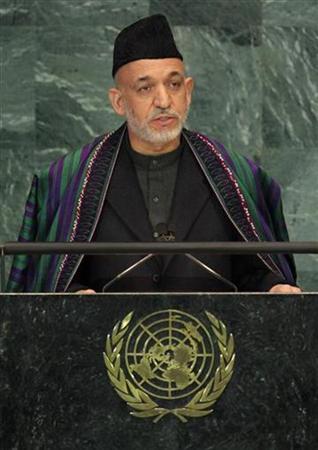 Afghan President Hamid Karzai speaks during a meeting of the General Assembly on the Culture of Peace at the United Nations in New York November 12, 2008.
REUTERS/Shannon Stapleton

KABUL (Reuters) – Afghan President Hamid Karzai said Wednesday he would bring down U.S. planes bombing villages if he could, in a sign of growing tension between Afghanistan and its Western backers as the Taliban insurgency grows in strength.

As Western dissatisfaction with Karzai has grown over his failure to crack down on corruption and govern effectively, the Afghan president, facing elections next year, has hit back over the killing of dozens of civilians in foreign air strikes.

In recent weeks, Karzai has repeatedly blamed the West for the worsening security in Afghanistan, saying NATO failed to target Taliban and al Qaeda sanctuaries in Pakistan and calling for the war to be taken out of Afghan villages.

“We have no other choice, we have no power to stop the planes, if we could, if I could … we would stop them and bring them down,” Karzai told a news conference.

He said that if he had something like the rock attached to a piece of string, known as a chelak in Dari, used to bring down kites in Afghanistan, he would use it.

“If we had a chelak, we would throw it and stop the American aircraft. We have no radar to stop them in the sky, we have no planes,” he said. “I wish I could intercept the planes that are going to bomb Afghan villages, but that’s not in my hands.”

Afghanistan has suffered its worst violence this year since U.S.-led and Afghan forces overthrew the Taliban in 2001, with at least 4,000 people killed, around a third of them civilians.

Despite the presence of 65,000 foreign troops backing 130,000 Afghan security forces, Taliban insurgents have grown increasingly confident in their traditional heartland in the south and east and have also extended their influence close to the capital, Kabul.

1 thought on “Afghan president wishes he could down U.S. planes”