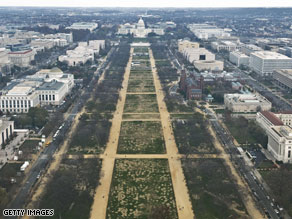 As many as 4 million people are expected to attend Obama’s inauguration at the Mall.

People attending the ceremony and parade on Jan. 20 can expect to be searched by machines, security personnel or both. Precautions will range from the routine – magnetometers like those used at airports – to countersnipers trained to hit a target the size of a teacup saucer from 1,000 yards away. Plus undercover officers, bomb sniffing dogs and air patrols.

The Secret Service – the agency coordinating the security – also has assigned trained officials to identify and prevent cyber security risks. And, as it does at every inauguration, the service has mapped out escape routes for the 44th president.

In addition Washington’s 5,265 surveillance cameras, spread around the city, are expected to be fed into a multi-agency command center.

“When you have an event like the inauguration, the more eyes we have in and around the city the better off we are,” District of Columbia Police Chief Cathy Lanier said. Streets will be closed within seven-to-eight blocks on both sides of Pennsylvania Avenue, and two-to-three blocks around each inaugural ball site, she said.

The already-high security for inaugurations was intensified in January 2005, for the first swearing-in after the September 11, 2001, terrorist attacks, and this year’s will follow that heightened model.

“I think you’re going to get people from all walks of life come into Washington, so I think that there will be a tremendous influx of people that will come early, that will camp out early and that
will probably remain, you know, to continue the festivities,” said Nick Trotta, assistant director of the Secret Service’s Protective Division.

The inauguration is designated a National Special Security Event, giving the Secret Service the lead among 58 law enforcement agencies involved in the security planning and execution. As the
date gets closer, the service could decide to extend the special security designation to Jan. 19 – Martin Luther King Day – when large crowds are expected to begin gathering in Washington.

At this point, the Secret Service does not have an estimate on how many people are expected for the inauguration. Reports that as many as 4 million people would come could not be corroborated with law enforcement agencies.

But officials expect to see more people at this inauguration than any other in the past.

The National Park Service says the largest crowd ever recorded on the National Mall was for President Lyndon B. Johnson’s 1965 inauguration. At the time, the park service estimated 1.2 million people attended the event.

Trotta acknowledged the reemergence of hate groups through the presidential campaign and since Obama’s election. Threats against Obama have been higher than any other president-elect in history. From Maine to Idaho, law enforcement officials have seen potentially threatening writings, racist Internet postings and other activity.

“It is a very historic inauguration – it is the first African-American to be sworn in as president,” Trotta said. “But that’s just a factor. Of course we’re not saying it doesn’t play a role, but it’s not the security issue.”

The security plans have not been completed, but Trotta expects the parade route and swearing-in to be the same as in past years. He would not say whether Obama would get out of his car during the parade or if Obama would be surrounded by bulletproof glass at the speaking podiums, as he was in Chicago on election night.

There has never been an assassination attempt at a presidential inauguration.

“The exposure’s there. The length of time is there. It’s a parade. We’re moving the White House in the middle of a parade,” Trotta said.

There has been no specific intelligence pointing to a potential terrorist attack during the inauguration, said Joseph Persichini Jr., assistant FBI director in charge of the Washington Field
Office.

“But we’re always vigilant,” he said, adding that visitors should help by watching for any suspicious activity.