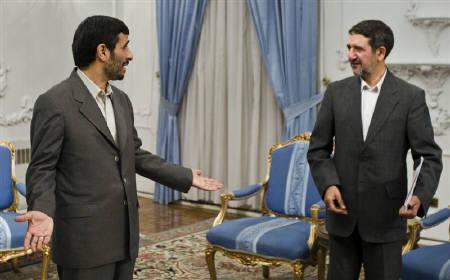 TEHRAN (Reuters) – Iran has converted financial reserves into gold to avoid future problems, an adviser to President Mahmoud Ahmadinejad said in comments published on Saturday, after the price of oil fell more than 60 percent from a peak in July.

Iran, the world’s fourth-largest oil producer, is under U.N. and U.S. sanctions over its disputed nuclear programme and is now also facing declining revenue from its oil exports after crude prices tumbled.

“With the plans of the presidency…the country’s money reserves were changed into gold so that we wouldn’t be faced with many problems in the future,” presidential adviser Mojtaba Samareh-Hashemi was quoted as saying by business daily Poul.

He gave no figures or other details.

Before oil prices plunged by more than 60 percent from a peak of $147 per barrel in July, Iran made windfall gains from its crude exports and in April estimated its foreign exchange reserves at about $80 billion.

Iranian officials in July denied reports Iranian banks were moving funds from Europe, with one report suggesting as much as $75 billion had been withdrawn and converted into gold or placed in Asian banks, because of a threat of tightening sanctions.

The International Monetary Fund said in August that if the price of Iranian crude fell to $75 a barrel, Iran would face a current account deficit in the medium term that would be tough to sustain due to Tehran’s financial isolation.

Gold futures ended more than 5 percent higher on Friday and bullion ended the week about $10 higher compared with its last Friday’s close of $735.95 as investors covered short positions.