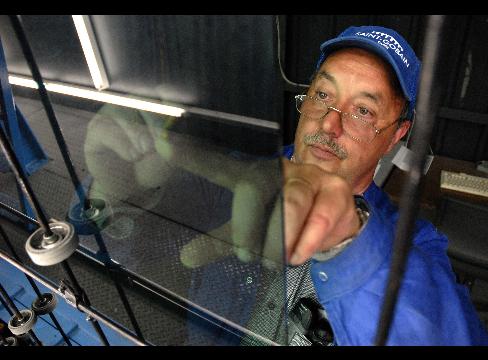 A worker checks a plate glass on the production line at the Saint-Gobain Chantereine glass factory in Thourotte, France, on Oct. 17, 2007. Photographer: Fabrice Dimier/Bloomberg News

The penalties were increased because the companies are repeat offenders, the commission said. Saint-Gobain, Pilkington and two competitors were fined a total of 487 million euros for participating in a separate cartel to set the prices of glass used in the construction industry. Saint-Gobain shares fell 5.2 percent.

“The fine is significantly higher than expected,” said Tim Cahill, analyst at Davy Stockbrokers in Dublin with a “focus list” rating on the stock. “They’re going to resist and appeal, but experience tells me that these fines are generally upheld.”

The penalties against the four companies are the largest ever for a single cartel. The EU imposed a 992.3 million-euro fine in February 2007 against five elevator makers for price- fixing.

Saint-Gobain, based near Paris, called the penalty “excessive and disproportionate” and plans to appeal the decision to EU courts in Luxembourg, spokeswoman Sophie Chevallon said in a telephone interview. The fine represents about 95 percent of annual revenue at the company’s car-glass unit in Europe and the profit of “several” decades, she said.

The French company has said it set aside 560 million euros to cover possible EU fines in the case. Standard and Poor’s said today Saint-Gobain’s appeal means it won’t change the credit ratings on the company. The rating agency said the company will likely increase its provisions at the end of the year.

The commission claims the companies held regular discussions from 1998 through 2003 at hotels and airports in European cities to allocate sales of glass to automobile manufacturers.

“These companies cheated the car industry and car buyers for five years in a market worth 2 billion euros in the last year of the cartel,” EU Competition Commissioner Neelie Kroes said in the statement. “The overall fines are high because of the large market, the seriousness of the case, and Saint-Gobain’s earlier offenses.”

Tokyo-based Asahi Glass, Japan’s largest glassmaker, booked a one-time charge of 32.4 billion yen ($330 million) to cover possible penalties in both glass cases, it said Feb. 5. Asahi’s fine was reduced by 50 percent under the EU’s leniency program for providing information about the cartel, the commission said.

Nippon Sheet Glass, the world’s biggest supplier of car windows, said in May 2007, that it set aside 350 million pounds ($533 million) for possible fines. Nippon Sheet Glass, also based in the Japanese capital, bought London-based Pilkington in 2006.

To contact the reporter on this story: Matthew Newman in Brussels at Mnewman6@bloomberg.net.