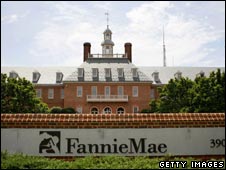 Nov. 10 (Bloomberg) — Fannie Mae posted a record quarterly loss as new Chief Executive Officer Herbert Allison slashed the value of the mortgage-finance provider’s assets by at least $21.4 billion and said it may need to tap federal funds next year.

In its first report since being seized by the U.S. government in September, Washington-based Fannie Mae said its third-quarter net loss was $29 billion, or $13 a share, the largest for any company in the Standard & Poor’s 500 this year.

Allison, installed when the government took over Fannie and smaller rival Freddie Mac, reduced most of Fannie’s deferred tax credits, increased default estimates and said credit losses will increase. The decisions cut the company’s net worth by 79 percent and shows the new management is taking a dimmer view of Fannie’s financial future than the team under former CEO Daniel Mudd.

Fannie, which traded at almost $50 a share a year ago, rose 4 cents to 78 cents at 9:31 a.m. in New York Stock Exchange composite trading. Fannie’s stock market value slumped from $39 billion at the beginning of the year to about $4 billion as of Nov. 7, including the government’s 79 percent stake.

Fannie slashed its net worth, or the difference between assets and liabilities, to $9.4 billion on Sept. 30 from $44.1 billion at Dec. 31. The company said today it may fall to negative net worth by the end of next quarter, requiring it to seek government funding. Fannie said today that it hadn’t tapped any federal aid through Nov. 7.

The Federal Housing Finance Agency placed Fannie and Freddie under its control Sept. 6 and forced out management after examiners found their capital to be too low and of poor quality. Treasury Secretary Henry Paulson pledged to invest as much as $100 billion in each company as needed to keep their net worth positive.

The companies will need that money “sooner rather than later,” according to Paul Miller, an analyst at Friedman, Billings, Ramsey in Arlington, Virginia. Miller predicted Allison, 65, would write down higher-than-expected credit costs, Miller said.

Fannie and Freddie, which own or guarantee about 40 percent of the U.S. mortgage market, stumbled just as the government started leaning on them to revive the housing market.

Fannie was created in the 1930s under Franklin D. Roosevelt’s “New Deal” plan to revive the U.S. economy. Freddie was started in 1970. The companies were designed to expand homeownership and provide market stability. They make money by financing mortgage-asset purchases with low-cost debt and on guarantees of home-loan securities they create out of loans from lenders.

Fannie’s tax credit, which totaled $20.6 billion as of June 30, had built up as losses deepened. Companies take the credits with the intent of using them to reduce tax bills when they become profitable again. The credits need to be written down if a company doesn’t see profits in the near future.

The use of deferred-tax assets and other accounting methods by Fannie and Freddie to inflate their capital reserves was cited by regulators as one of the reasons why the government took control of the firms. In the statement today, Fannie said it had $4.6 billion of tax credits remaining.

Fannie set aside $6.7 billion to cover delinquencies as home prices drop, up from $3.7 billion last quarter. The company also charged off $1.8 billion in securities losses it had previously categorized as temporary because executives had anticipated the assets would recover.

Credit-related expenses rose 74 percent to $9.2 billion from $5.3 billion last quarter, including the provisions for future losses.

“The new management team has no incentive to sugarcoat their earnings,” Miller said.

To contact the reporter on this story: Dawn Kopecki in Washington at dkopecki@bloomberg.net