New Obama Chief of Staff, Others on Board, Missed “Red Flags” of Alleged Fraud Scheme

President-elect Barack Obama’s newly appointed chief of staff, Rahm Emanuel, served on the board of directors of the federal mortgage firm Freddie Mac at a time when scandal was brewing at the troubled agency and the board failed to spot “red flags,” according to government reports reviewed by ABCNews.com. 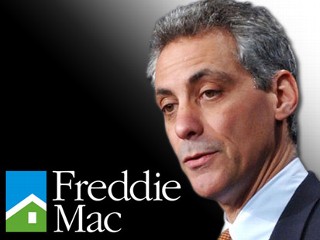 President-elect Barack Obama’s newly appointed chief of staff, Rahm Emanuel, served on the board of directors of the federal mortgage firm Freddie Mac at a time when scandal was brewing at the troubled agency and the board failed to spot “red flags,” according to government reports reviewed by ABCNews.com.

According to a complaint later filed by the Securities and Exchange Commission, Freddie Mac, known formally as the Federal Home Loan Mortgage Corporation, misreported profits by billions of dollars in order to deceive investors between the years 2000 and 2002.

In a statement to ABCNews.com, a spokesperson said Emanuel served on the board for “13 months-a relatively short period of time.”

The spokesperson said that while on the board, Emanuel “believed that Freddie Mac needed to address concerns raised by Congressional critics.”

Freddie Mac agreed to pay a $50 million penalty in 2007 to settle the SEC complaint and four top executives of the Federal Home Loan Mortgage Corporation were charged with negligent conduct and, like the company, agreed to settle the case without admitting or denying the allegations.

The actions by Freddie Mac are cited by some economists as the beginning of the country’s economic meltdown.

The federal government this year was forced to take over Freddie Mac and a sister federal mortgage agency, Fannie Mae, pledging at least $200 billion in public funds.

Freddie Mac records have been subpoenaed by the Justice Department as part of its investigation of the suspect accounting procedures.

Emanuel was named to the Freddie Mac board by President Bill Clinton in 2000 and resigned his position when he ran for Congress in May, 2001.

During the years 2000, 2001 and 2002, according to the SEC, Freddie Mac substantially misrepresented its income to “present investors with the image of a company that would continue to generate predictable and growing earnings.”

The role of the 18-member board of directors, including Emanuel, was not addressed in the SEC’s public action but was heavily criticized by the oversight group (OFHEO) in 2003.

The oversight report said the board had been apprised of the suspect accounting tactics but “failed to make reasonable inquiries of management.”

The report also said board members appointed by the President, such as Emanuel, serve terms that are far too short “for them to play a meaningful role on the Board.”

As a Congressman, Emanuel recused himself from any votes dealing with Freddie Mac until just this year.

In dealing with the nation’s economic crisis, the new White House chief of staff will almost certainly be involved in discussions about the house and mortgage markets.

Emanuel’s spokesperson said, “As White House chief of staff he will work with President-elect Obama and his economic advisers to help ensure we protect taxpayers and homeowners.”