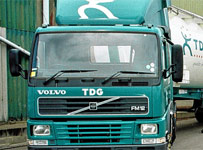 Driven down: sales of Volvo trucks have dipped a staggering 99.7%

The depth of the recession was revealed today as truckmaker Volvo admitted demand across the Continent has crashed by 99.7% as it took orders for just 115 new lorries in the last three months.

That compares to orders totalling 41,970 in the third quarter of 2007. Global orders for Volvo slumped 55% in the last three months while Scania, of which Volvo has majority control, said its western Europe truck orders collapsed by 69%.

Volvo, which also makes trucks under the Renault and Mack brands, reported a 37% plunge in third-quarter earnings to £230m.

‘The downturn in the economy has been significantly exacerbated by the global financial crisis,’ the company said. ‘The important European market has declined significantly while North America and Japan continue to show weak demand.’

Volvo indicated that there could be thousands of job losses. It has already said 1400 jobs are going, and yesterday revealed that 850 jobs would be axed in its division making heavy construction vehicles.