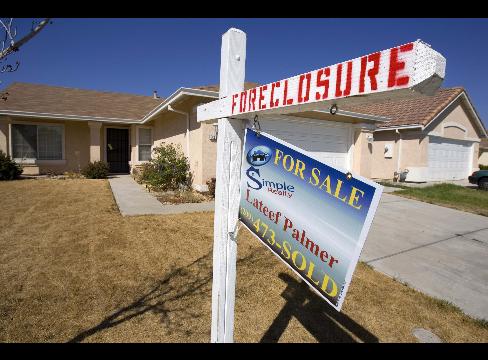 A foreclosure sign is posted outside a house in Stockton, California, on Sept. 18, 2008. Photographer: Kimberly White/Bloomberg News

Oct. 23 (Bloomberg) — U.S. foreclosure filings increased 71 percent in the third quarter from a year earlier to the highest on record as home prices fell and stricter mortgage standards made it harder for homeowners to sell or refinance, RealtyTrac said.

A total of 765,558 U.S. properties got a default notice, were warned of a pending auction or were foreclosed on in the quarter, the most since records began in January 2005, the Irvine, California-based seller of default data said in a statement today. Filings rose 3 percent from the second quarter and fell 12 percent in September from August as state laws created to keep people in homes slowed the pace of defaults.

“I wouldn’t be surprised to see foreclosures increase as the economy slows down,” Rick Sharga, executive vice president for marketing at RealtyTrac, said in an interview. “The people living paycheck to paycheck are at risk if they lose their jobs. It will cause more people to lose their homes.”

The worst U.S. housing slump since the 1930s is being compounded by a recession that began in the third quarter and may last a year or more, according to Jay Brinkmann, chief economist for the Mortgage Bankers Association. Home prices in 20 U.S. metropolitan areas fell in July at the fastest pace on record, and sales of previously owned homes in August were 32 percent below the peak reached in September 2005.

The government may buy home loans and related securities to help property owners struggling with monthly payments, even as “people are walking away from their mortgages,” Treasury Secretary Henry Paulson said in an interview with PBS television’s Charlie Rose on Oct. 21. Congress passed a $700 billion financial-rescue fund that may be used to modify loans and inject capital to banks and unfreeze credit markets.

A new law in California, which accounted for 27 percent of the foreclosure filings in the third quarter, helped slow the process in September as notices of default dropped 51 percent compared with the previous month, RealtyTrac said. In North Carolina, default notices fell 66 percent last month after lawmakers required lenders to give homeowners an additional 45- day notice.

In Massachusetts, filings rose 465 percent in September from August after a law was passed requiring a 90-day notice before foreclosures could proceed, RealtyTrac said.

After a summer lull, defaults “jumped back up close to the level we were seeing earlier in the year,” James Saccacio, chief executive officer of RealtyTrac, said in the statement.

Homeowners may be buffeted by a deepening recession as consumer spending contracts and job losses mount, especially in states such as Michigan and Ohio where manufacturing has declined, said Brinkmann of the mortgage bankers group.

“The length of the recession will depend on how this bleeds over to employment,” he said. The housing bust is the main reason more than 98,000 jobs in Florida and 77,700 in California were lost in the year through August, Brinkmann said.

Six states accounted for more than 60 percent of defaults in the third quarter, led by California with 210,845 foreclosure filings, more than double the amount from a year earlier, according to RealtyTrac. Florida more than doubled its total to 127,306 from the same period a year ago and Arizona almost tripled to 40,419. Ohio, Michigan and Nevada reported third- quarter filings of more than 30,000 each.

California had six of the 10 metropolitan areas with the highest foreclosure rates in the quarter, led by Stockton, where 3.69 of the housing units received a default filing in the quarter. Riverside-San Bernardino ranked third, Bakersfield was fourth, Sacramento was seventh and Fresno and Oakland ranked ninth and 10th, respectively, RealtyTrac said.

Las Vegas had the second-highest metro foreclosure rate with 3.48 of its housing units receiving a filing in the third quarter, more than double the amount from a year earlier. Fort Lauderdale and Orlando in Florida ranked fifth and eighth, respectively, said RealtyTrac, which has a database of more than 1.5 million properties.

Nationwide in September, one in every 475 U.S. housing units received a foreclosure filing.

The state of the U.S. economy is emerging as a key issue in the presidential race between Democrat Barack Obama of Illinois and Arizona Senator John McCain, a Republican.

Obama supports an economic stimulus plan to boost the economy, while McCain wants the government to purchase troubled mortgages.