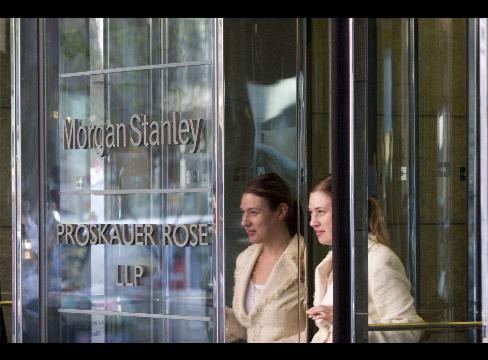 Oct. 21 (Bloomberg) — Wall Street had it wrong: An investment bank’s most precious asset isn’t the army of employees who head down the elevators each day. It’s the paychecks they take with them out the door.

You can imagine the devilish grins on the faces of Morgan Stanley employees last week, after the Treasury Department said it would pump $10 billion into the bank. Not only did we, the taxpayers, save their company, with the help of a Japanese bank named Mitsubishi UFJ Financial Group Inc. More importantly, we funded their 2008 bonus pool.

Morgan Stanley has accrued $10.7 billion of employee- compensation expense this year, almost twice as much as its pretax earnings. The vast majority of this remuneration hasn’t been paid yet. Now it probably will be, assuming the firm survives through next month. Meantime, Morgan Stanley’s stock- market value has dropped $34.7 billion, to $21 billion, since the company’s fiscal year began.

The rescue of Morgan Stanley’s bonus pool is an unpleasant downside of Treasury Secretary Hank Paulson‘s decision to inject $250 billion of cash into U.S. banks in exchange for preferred stock. It is one thing for a company to pay much more to employees than it earns for its shareholders. It’s quite another to keep doing it while receiving taxpayer bailout bucks.

Before securities firms were public companies, a brokerage in need of capital would have called on its partners to pony up. That’s how it still works at private partnerships, such as law firms. The reason they don’t get taxpayer rescues is they can’t credibly threaten to take down the world’s financial system.

Morgan Stanley can. So can Paulson’s old firm, Goldman Sachs Group Inc., which also is getting a $10 billion infusion from Treasury. Year-to-date, Goldman has reported $11.4 billion of compensation expense, almost twice its $5.9 billion of pretax earnings. During the same span, its market capitalization has fallen $41.7 billion, to $57.7 billion.

Morgan Stanley needed Treasury’s cash. Goldman didn’t, but got it anyway. As long as Paulson can’t think of any better ideas, the government will keep throwing money at an industry that pays too many people more than they’re worth, to perform services the world has too much of already. The bright side is we avoid a global meltdown, for now.

Here’s all you really need to know to see who lost and who benefited most at the Five Families of Wall Street, otherwise known as Goldman, Morgan Stanley, Merrill Lynch, Lehman Brothers and Bear Stearns. From the start of their 2004 fiscal years through yesterday, the big standalone investment banks lost about $83 billion of stock-market value. During the same period, they reported about $239 billion of employee-compensation expense.

So, for every dollar of shareholder value destroyed, the employees got paid almost three. Only a sliver of that money went to chief executives such as Goldman’s Lloyd Blankfein, who got a $70.3 million package last year, and Lehman’s Richard Fuld, who made $34.4 million. Morgan Stanley’s John Mack, by the way, received $1.6 million for 2007.

The Five Families — now down to just Goldman and Morgan Stanley — weren’t alone. Citigroup Inc., which is getting a $25 billion injection from Treasury, has reported $139.3 billion of compensation expense since the start of 2004, more than double its $62.8 billion of pretax earnings. Its market cap, by comparison, has declined by about $168 billion, to $82 billion.

For all the complaints about outrageous executive pay and how little Paulson is doing to curb it, a big reason why these firms have been scrounging for capital is they keep blowing huge wads of it on their rank-and-file, too. The Paulson plan will do nothing to change that.

In the interim, we continue propping up an industry that’s bloated with overcapacity, because we’re all too scared to let the market fix it. That’s good for the people getting bonus checks at Morgan Stanley and Goldman Sachs. It’s not so great for the rest of us.