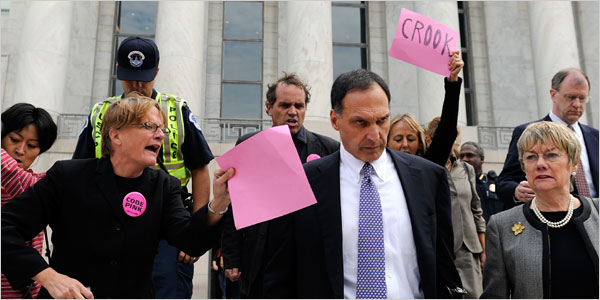 NEW YORK (Reuters) – Prosecutors have stepped up the investigation into the collapse of Lehman Brothers, with at least a dozen subpoenas being issued including one to the investment bank’s chief executive, Richard Fuld, The New York Times reported on Saturday.

Citing people close to the probe who requested anonymity, the Times said federal prosecutors in Brooklyn, Manhattan and New Jersey were examining events leading to Lehman’s collapse and bankruptcy filing.

One person said New Jersey prosecutors were looking into whether Lehman executives including Fuld misled investors involved in the $6 billion infusion of capital announced by Lehman in June about the bank’s condition, the Times said. That infusion came as Lehman disclosed a $2.8 billion third-quarter loss, which caused its shares to plunge.

The Times said the New Jersey Division of Investment, which put money into the capital raising, had been subpoenaed, and that the division’s director did not return a call seeking comment.

Brooklyn and Manhattan prosecutors meanwhile are looking into remarks made by Lehman executives during a September 10 conference call, which was five days before the company’s bankruptcy filing, the newspaper said, and are also investigating whether Lehman assigned proper values on its large commercial real estate holdings.

It remains unclear whether any of the offices will bring their cases, the newspaper said.

And while the Times said no conclusions had been drawn, legal experts expected prosecutors would likely try to build fraud cases against Lehman executives by finding internal documents that contradicted public statements about the bank’s status.

Representatives of the prosecutors’ offices declined to comment, as did a spokesman for Fuld, the Times said, although Fuld has said his statements about Lehman’s condition were based on the best information he had at the time.

Other subpoenaed current and former Lehman executives include Joseph Gregory, the former president, and Erin Callan, former chief financial officer, the Times said, citing a person with knowledge of the matter.