Christine Lagarde, the French finance minister, warned her US counterpart Hank Paulson that he had to bail out US investment bank Lehman Brothers or face global financial collapse, but her advice went unheeded. 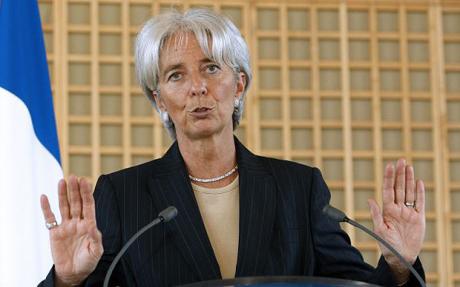 Christine Lagarde, the French finance minister, warned her US counterpart Hank Paulson that he must bail out US investment bank Lehman Brothers or face global financial collapse, but her advice went unheeded. Photo: Reuters

Sources close to Mrs Lagarde said that she had called the US Treasury Secretary – a close personal friend – well before the ailing bank’s collapse imploring him to act, but he chose not to.

Lehman Brothers’ demise sparked the biggest shake-up on Wall Street in decades and sent shock waves around the world that triggered a massive bailout plan in Britain and Europe.

Mrs Lagarde – attributed with playing a key role in brokering a bailout deal among G7 finance ministers in Washington last weekend – dubbed Mr Paulson’s decision to let the bank go under “horrendous” as it triggered panic in markets and banks to the brink of a 1929-style financial meltdown.

In an interview with the Daily Telegraph, she warned that the world’s hedge funds could be the next institutions to be hit by the financial turmoil.

Mrs Lagarde, a perfect English speaker, said that governments must be “vigilant” over the health of hedge funds. “Initially everybody thought the hedge fund sector would be the first one to actually cause the collapse. They are vastly unregulated, they have been operating at the fringes, at the margin, and we need to be careful that there is no contamination effect,” she said.

Her warning will send a shiver through the $2 trillion (£1.15billion) hedge fund industry, which has doubled in size in the last three years and proved to be one of the most powerful forces in the global financial system.

Hedge funds came about as an alternative to traditional fund managers, who invest clients’ money on their behalf, in stocks, bonds, property and other assets.

Whereas a traditional fund manager’s strategy is to “beat the market”, hedge fund managers promise – in return for a large fee – to make “absolute returns” for their clients, making a profit even if the stock or property market is falling.

Many wealthy individuals, as well as pension funds, and even some UK local authorities have their money invested with hedge funds.

The current concern over hedge funds is that they have been hit doubly hard by the collapse in global stock markets because they are leveraged. That means they have borrowed money to invest in stock markets, and many of their investors now want their money back.

This has forced them to sell assets rapidly. The situation has been exacerbated by the UK authorities ban on short selling on some shares – a favoured technique of the hedge funds, which allowed them to bet on falling prices.

Mrs Lagarde, however, gave no concrete proposals as to how the situation could be fixed. “One thing at a time; We are working on that at the moment but I don’t have the tools and the fixing and the solutions on hand,” she said.

But she insisted that the coordinated £2 trillion bank injection package into financial markets by governments around the world would still prove effective, despite market panic over global recession.

Stock market indexes were not, she said, the “target” of the concerted action. “Our first job was making sure the financial system functions, and I think we are having signs that it’s beginning to change,” she said.

Stocks, she said, were going down due to fear of recession not directly linked to the action plan. “They are going down for other reasons. A lot of traders and investors expect the economy to go South and, as a result, that companies will not generate the level of profit they expected when invested in those stocks,” she said.

She has asked European Central Bank head Jean-Claude Trichet to come up with a way of measuring the true liquidity among banks, which she said could not be seen by looking at stock exchanges. “This is not an easy index to communicate on, you need measure spreads of money markets. I suggested to Jean-Claude Trichet to think about an instrument that helps measure liquidity of system,” she said.

Mrs Lagarde refused to be drawn on whether France was in a recession.

“The problem is addressing the roots of the problem. We have fixed the toothache but not the root canal,” she said.

Her comments came as French President Nicolas Sarkozy called yesterday for an international summit on a global financial overhaul to be held before the end of this year, preferably in November.

The so-called “Bretton Woods II” summit – in reference to the Bretton Woods accords which in 1944 constructed the postwar financial order – would gather EU countries, the US and emerging economies such as China and India. They would discuss changing the way the International Monetary Fund and World Bank operate.

Mr Sarkozy said he expected the summit to address tax havens, financial supervision, hedge funds, and how to deal with credit rating agencies in the future.

Mrs Lagarde implied that the US administration was willing and prepared to give the green light to such a drastic overhaul.

“My sense is that the situation is so critical that the United States have listened, are listening and will be listening to the Europeans advice and recommendations. And the proof of that is the way the TARP, the initial Paulson plan has been re-engineered, quite frankly to look very much like the European plan. The Americans are refinancing by way of guarantees and recapitalisation by way of injecting new equity controlled by the state, which is unbelievable,” she said.

A behind-the-scenes row smouldered over whether it was Gordon Brown or Nicolas Sarkozy who came up with the Bretton Woods II plan. The consensus among most European diplomats is that it was Mr Brown. Mrs Lagarde described the battle of egos as “rubbish.” “It’s completely useless and hopeless to nitpick as to whether it’s Browns’s or Sarkozy’s plan or the eurogroup’s plan,” she said. “The important thing is to make it work.”

“The emergence of this economic governance of Europe, which we had been waiting for for such a long time and which started last Sunday in Paris, should not be stopped,” he told EU leaders at a summit Brussels.

“The countries that have got the same central bank, the same currency, must try to co-ordinate their economic policies,” he said.

“Do we need the same co-ordination for the economic policy as for the financial policy? From the French EU presidency’s point of view the answer is ‘yes, yes, yes, yes’,” he said.

“Do we have unanimity at this stage? No, no, no,” he added, while stressing he remained optimistic nevertheless.

Mrs Lagarde said that such economic governance was already evident in the handling of the crisis. “The proof is in the pudding. To have had a summit of heads of state of euro group sitting at same table as Barroso, Trichet, Jean-Claude Juncker – that has never happened before,” she said, adding that Gordon Brown had “played his part beautifully by being not too far and not too near.”

Asked whether the current state bank bailout packages were a triumph for Gallic dirigisme over British and US laissez-faire, she said: “For decades, Europe was often trailing behind US and what people abusively call the Anglo-Saxon world regarding finance. Today, we are clearly seeing a changeover.”