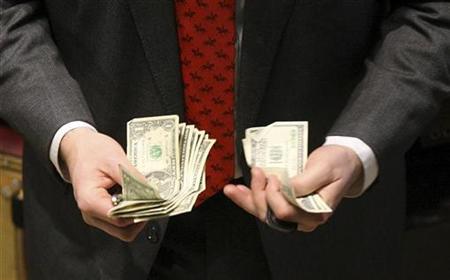 A trader counts his money on the floor of the New York Stock Exchange October 7, 2008. REUTERS/Brendan McDermid

NEW YORK (Reuters) – Financial institutions ran to their lender of last resort for record amounts of cash in the latest week, under extreme pressure from the worst global financial crisis in a generation, Federal Reserve data showed on Thursday.

Banks and dealers’ overall direct borrowings from the Fed averaged a record $437.53 billion per day in the week ended October 15, topping the previous week’s $420.16 billion per day.

Some analysts are concerned that banks’ dependence on Fed lending might become long term and difficult to change.

“The banking system is going to become addicted to this very cheap money. Unwinding it will be very difficult,” said Howard Simons, strategist with Bianco Research in Chicago.

“We have effectively allowed the central banks to disintermediate the banking system. Why would I want to borrow from you if I could do it with the central bank, because they can always print it up and say ‘here’…and they are in the business now of making sure I stay in business,” Simons said.

The Fed’s lending to banks to enable them to purchase asset-backed commercial paper from money market mutual funds was $122.76 billion as of October 15, versus $139.48 billion on October 8.