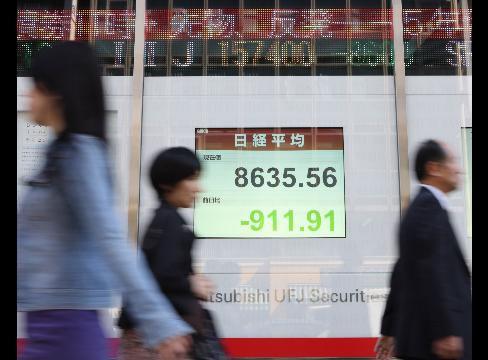 Oct. 16 (Bloomberg) — Japanese stocks plunged the most in two decades as a drop in U.S. retail sales pointed to a deepening recession and Prime Minister Taro Aso reinforced concern a bank bailout will fail to stem a rout in global markets.

Honda Motor Co., which gets more than half its profit from North America, sank 10 percent, while Nintendo Co. tumbled by its daily limit in Osaka after retail receipts in the U.S. fell for a third month. JFE Holdings Inc., Japan’s second-biggest steelmaker, declined 15 percent after UBS AG cut its price estimate by 64 percent. Oil explorer Inpex Corp. lost 14 percent, the most on record, after crude slid to the lowest in a year.

“The American spending spree we’ve seen in the past few years has totally evaporated,” said Yoshinori Nagano, a Tokyo- based senior strategist at Daiwa Asset Management Co., which manages $96 billion. “The earnings outlook for auto manufacturers and electronics makers is particularly harsh.”

The Nikkei 225 Stock Average declined 1,089.02, or 11 percent, to close at 8,458.45 in Tokyo, the second-steepest plunge in its 59-year history. The broader Topix index fell 90.99, or 9.5 percent, to 864.52. Both gauges sank the most since October 1987. The Osaka Securities Exchange temporarily halted trading in Nikkei futures after a plunge in shares triggered circuit breakers.

Sales at U.S. retailers fell 1.2 percent in September, the most since August 2005 and extending a drop to a third month, the first time that’s happened since 1992. That coincided with the Federal Reserve’s release of its Beige Book report, which said economic activities weakened last month throughout the country.

In New York, the Standard & Poor’s 500 Index had its steepest drop since the crash of 1987. That almost erased gains on Oct. 13 when the market climbed the most since the 1930s on speculation a $250 billion U.S. government plan to support banks will ease the credit crisis.

“People think the $250 billion plan is insufficient and that’s why markets are falling,” Aso told lawmakers in parliament in Tokyo today. If the U.S. doesn’t accelerate plans to support banks, it risks “paying a higher price,” Aso said.

To contact the reporter for this story: Masaki Kondo in Tokyo at mkondo3@bloomberg.net.