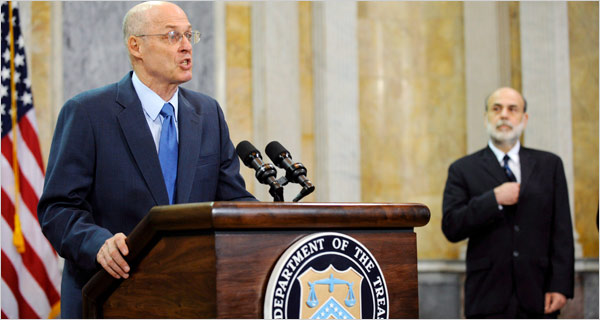 WASHINGTON – Describing the government’s financial bailout plan as “extensive, powerful and transformative,” Treasury Secretary Henry M. Paulson Jr. said on Tuesday that the injection of $250 billion into the nation’s banks was needed to restore confidence and avoid a collapse of the financial system.

Speaking shortly after President Bush used similar terms to describe the proposal, Mr. Paulson said the Treasury would make $250 billion available to banks to help recapitalize those banks and to get them lending again, among themselves and to businesses and consumers.

“The needs of our economy require that our financial institutions not take this new capital to hoard it, but to deploy it,” Mr. Paulson said, who offered some details of the plan along with the Federal Reserve chairman, Ben S. Bernanke, and the chairman of the Federal Deposit Insurance Corporation, Sheila C. Bair.

With the proposal, the United States follows similar plans announced Monday across Europe – almost all intended to inject money into the banks and unfreeze the credit markets. Markets around the world have rebounded on news of the coordinated efforts. The Dow Jones industrial average gained 936 points, or 11 percent on Monday, the largest single-day gain in the American stock market since the 1930s, and gained more than 300 points more in the opening minutes of trading on Tuesday. European markets were up at least 5 percent on Tuesday after rising nearing 10 percent Monday.

In addition to injecting money into the banks, according to the plan, the United States would also guarantee new debt issued by banks for three years – a measure meant to encourage the banks to resume lending to one another and to customers.

The F.D.I.C. would also offer an unlimited guarantee on bank deposits in accounts that do not bear interest – typically those of businesses – bringing the United States in line with several European countries, which have adopted such blanket guarantees.

And the Federal Reserve would start a program to become the buyer of last resort for commercial paper, a move intended to help businesses get the money they need for day-to-day operations.

Calling the need to inject money into banks regrettable, Mr. Paulson said it was nevertheless necessary.

“The alternative of leaving businesses and consumers without access to financing is totally unacceptable,” Mr. Paulson said. “When financing isn’t available, consumers and businesses shrink their spending, which leads to businesses cutting jobs and even closing up shop.”

Mr. Bernanke, echoing Mr. Paulson’s comments, said, “Americans can be confident that every resource is being brought to bear,” including political leadership.

“I strongly believe” that the application of the measures together with resilience of American economy “will help restore confidence,” Mr. Bernanke said.

As the White House has done since the House of Representatives rejected the initial bailout legislation, Mr. Bush sought to assure Americans that the efforts were necessary to protect their savings and retirement.

Each of the programs protects taxpayers, Mr. Bush said, and is “limited and temporary.”

“I recognize that the action leaders are taking here in Washington and in European capitals can seem distant from those concerns,” he said. “But these efforts are designed to directly benefit the American people by stabilizing our overall financial system and helping our economy recover.”

Mr. Paulson outlined the plan to eight of the nation’s leading bankers at a meeting Monday afternoon. He essentially told the participants that they would have to accept government investment for the good of the American financial system, according to officials.

Another $125 billion is allocated for thousands of small and midsize banks. They will be eligible for government investments reflecting a similar proportion of their assets.

And he said, “Institutions that sell shares to the government will accept restrictions on executive compensation, including a clawback provision and a ban on golden parachutes during the period that Treasury holds equity issued through this program.”

Under the plan, the government will receive an annual dividend of 5 percent for the first five years and 9 percent after that, the Treasury said. The government’s stake in the company would be non-voting.

Over the weekend, central banks flooded the system with billions of dollars in liquidity, throwing out the traditional financial playbook in favor of a series of moves that officials hoped would get banks lending again.

The Treasury’s plan would help the United States catch up to Europe in what has become a footrace between countries to reassure investors that their banks will not default or that other countries will not one-up their rescue plans and, in so doing, siphon off bank deposits or investment capital.

“The Europeans not only provided a blueprint, but forced our hand,” said Kenneth S. Rogoff, a professor of economics at Harvard and an adviser to John McCain, the Republican presidential nominee. “We’re trying to prevent wholesale carnage in the financial system.”

In the process, Mr. Rogoff and other experts said, the government is remaking the financial landscape in ways that would have been unimaginable a few weeks ago – taking stakes in the industry and making Washington the ultimate guarantor for banking in the United States.

But the pace of the crisis has driven events, and fissures in places as far-flung as Iceland, which suffered a wholesale collapse of its banks, persuaded officials to act far more decisively than they had previously.

“Over the weekend, I thought it could come out very badly,” said Simon Johnson, a former chief economist of the International Monetary Fund. “But we stepped back from the cliff.”

The guarantee on bank debt is similar to one announced by several European countries earlier on Monday, and is meant to unlock the lending market between banks. Banks have curtailed such lending – considered crucial to the smooth running of the financial system and the broader economy – because they fear they will not be repaid if a bank borrower runs into trouble.

But officials said they hoped the guarantee on new senior debt would have an even broader effect than an interbank lending guarantee because it should also stimulate lending to businesses.

Another part of the government’s remedy is to extend the federal deposit insurance to cover all small-business deposits. Federal regulators recently have been noticing that small-business customers, which tend to carry balances over the federal insurance limits, have been withdrawing their money from weaker banks and moving it to bigger, more stable banks.

Congress had already raised the F.D.I.C.’s deposit insurance limit to $250,000 earlier this month, extending coverage to roughly 68 percent of small-business deposits, according to estimates by Oliver Wyman, a financial services consulting firm. The new rules would cover the remaining 32 percent.

“Imposing unlimited deposit insurance doesn’t fix the underlying problem, but it does reduce the threat of overnight failures,” said Jaret Seiberg, a financial services policy analyst at the Stanford Group in Washington.

“If you reduce the threat of overnight failures,” Mr. Seiberg said, “you start to encourage lending to each other overnight, which starts to restore the normal functioning of the credit markets.”

Recapitalizing banks is not without its risks, experts warned, pointing to the example of Britain, which announced its program last week and injected its first capital into three banks on Monday.

Shares of the newly nationalized banks – Royal Bank of Scotland, HBOS and Lloyds – slumped on Monday, despite a surge in banks elsewhere, because shareholder value was diluted by the government.

The move, analysts said, makes the government Britain’s biggest banker. And it creates a two-tier banking system in which the nationalized banks are run like utilities and others are free to pursue profit growth. As part of the plan, the chief executives of the three banks stepped down.

In a letter to Mr. Paulson on Monday, Mr. Schumer, chairman of the Joint Economic Committee, urged the Treasury to demand that banks receiving capital eliminate their dividends, restrict executive pay and stick to “safe and sustainable, rather than exotic, financial activities.”

“I don’t think making this as easy as possible for the financial institutions is the way to go,” Mr. Schumer said in a call with reporters. “You need some carrots but you also need some sticks.”

But officials said the banks would not be required to eliminate dividends, nor would the chief executives be asked to resign. They will, however, be held to strict restrictions on compensation, including a prohibition on golden parachutes and requirements to return any improper bonuses. Those rules were also part of the $700 billion bailout law passed by Congress.

Bringing together all nine executives and directing them to participate was a way to avoid stigmatizing any one bank that chose to accept the government investment.

The preferred stock that each bank will have to issue will pay special dividends, at a 5 percent interest rate that will be increased to 9 percent after five years. The government will also receive warrants worth 15 percent of the face value of the preferred stock. For instance, if the government makes a $10 billion investment, then the government will receive $1.5 billion in warrants. If the stock goes up, taxpayers will share the benefits. If the stock goes down, the warrants will be worthless.

As Treasury embarked on its recapitalization plan, it offered some details on the nuts-and-bolts of the broader bailout effort. The program’s interim head, Neel T. Kashkari, said Treasury had filled several senior posts and selected the Wall Street firm Simpson Thacher as a legal adviser.

It named an investment management consultant, Ennis Knupp, based in Chicago, to help it select asset management firms to buy distressed bank assets. And it plans to announce the firm that will serve as the program’s prime contractor, running auctions and holding assets, within the next day.

“We are working around the clock to make it happen,” said Mr. Kashkari, a former Goldman Sachs banker who has been entrusted with the job of building this operation within weeks.

As details of the American recapitalization plan emerged, fears grew over the impact on smaller countries. Iceland is discussing an aid package with the International Monetary Fund, a week after Reykjavik seized its three largest banks and shut down its stock market.

The fund also offered “technical and financial” aid to Hungary, which last week suffered a run on its currency. Prime Minister Ferenc Gyurcsany said the country would accept aid only as a last resort.

In a new report on capital flows, the Institute of International Finance projected that net capital in-flows to emerging markets would decline sharply, to $560 billion in 2009, from $900 billion last year.

In Asia, markets continued to rise on Tuesday, lifted further by the announcement that the Japanese government would inject 1 trillion yen ($9.7 billion) into the financial system.