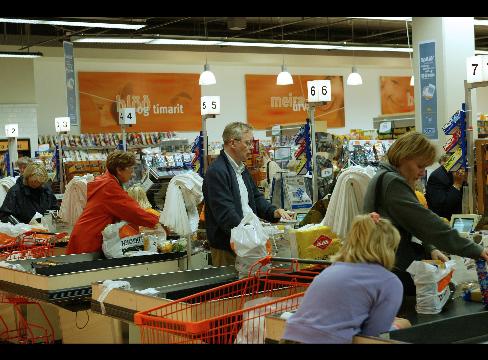 Reykjavik, Iceland, on Monday, Oct. 13, 2008. After a four-year spending spree, Icelanders are flooding the supermarkets one last time, stocking up on food as the collapse of the banking system threatens to cut the island off from imports. Photographer: Arnaldur Halldorsson/Bloomberg News

Oct. 13 (Bloomberg) — After a four-year spending spree, Icelanders are flooding the supermarkets one last time, stocking up on food as the collapse of the banking system threatens to cut the island off from imports.

“We have had crazy days for a week now,” said Johannes Smari Oluffsson, manager of the Bonus discount grocery store in Reykjavik’s main shopping center. “Sales have doubled.”

Bonus, a nationwide chain, has stock at its warehouse for about two weeks. After that, the shelves will start emptying unless it can get access to foreign currency, the 22-year-old manager said, standing in a walk-in fridge filled with meat products, among the few goods on sale produced locally.

Iceland’s foreign currency market has seized up after the three largest banks collapsed and the government abandoned an attempt to peg the exchange rate. Many banks won’t trade the krona and suppliers from abroad are demanding payment in advance. The government has asked banks to prioritize foreign currency transactions for essentials such as food, drugs and oil.

The crisis is already hitting clothing retailers. A short walk from Bonus in the capital’s Kringlan shopping center, Ragnhildur Anna Jonsdottir, 38, owner of the Next Plc clothing store, said she can’t get any foreign currency to pay for incoming shipments and, even if she could, the exchange rate would be prohibitively high.

“We aren’t getting new shipments in, as we normally do once a week,” Jonsdottir said. “This is the third week that we haven’t had any shipments.”

Iceland’s 320,000 inhabitants have enjoyed four years of economic growth in excess of 4 percent as banks and businesses expanded abroad, buying up companies from brokerages to West Ham United soccer club. Now, the three biggest banks, Kaupthing Bank hf, Landsbanki Island hf and Glitnir Bank hf have collapsed under the weight of about $61 billion in debts, 12 times the size of the economy, according to data compiled by Bloomberg.

The central bank, or Sedlabanki, ditched its attempt to peg the krona to a basket of currencies on Oct. 9, after just two days, citing “insufficient support” in the market. Nordea Bank AB, the biggest Scandinavian lender, said the same day that the krona hadn’t been traded on the spot market, while the last quoted price was 340 per euro, compared with 122 a month ago.

“There is absolutely no currency in the country today to import,” said Andres Magnusson, chief executive officer of the Icelandic Federation of Trade and Services in Reykjavik. “The only way we can solve this problem is to get the IMF into the country.”

The International Monetary Fund sent a delegation to the island last week. Prime Minister Geir Haarde said on Oct. 9 his country may ask it for money after failing to get “the response that we felt that we should be able to get” from European governments and central banks. The state will also start talks with Russia over a possible 4 billion-euro ($5.5 billion) loan.

Iceland‘s rugged, treeless terrain, a barren stretch of volcanic rock, geysers and moss, means the country imports most food, other than meat, fish and dairy products.

Magnusson said last week that one of Iceland’s largest supermarket chains was unable to get any foreign currency to make purchases abroad and another retailer’s electronic payment didn’t go through. Iceland will begin to see shortages of “regular goods” by the end of the week if nothing changes, he said.

“We are struggling to make the economy survive from hour to hour,” Magnusson said. “There is an enormous amount of capital that wants to get out of the country.”

Sedlabanki told lenders on Oct. 10 that residents who want foreign currency should first prove they need the money for traveling by providing documentation for their trip.

Wholesalers are demanding that importers pay before any goods are shipped, said Knutur Signarsson, head of the Reykjavik-based Federation of Icelandic Trade. Under normal circumstances, wholesalers abroad would extend credit for 30 to 90 days, he said.

“Many of them ask us to pay cash before they send the goods to Iceland,” Signarsson said. “Because of the situation, Iceland has become a country that no one trusts any longer.”

Bogi Thor Siguroddsson, owner of Johan Roenning, an import and retail business which has about 7 billion krona ($71 million) in annual sales, says he’s instructed his purchasing managers to only import the core goods, including light bulbs, lamps and electrical cables, they need to serve their customers.

“It’s enough to have the credit crisis,” he said. “Then you have the currency crash. Unfortunately, we have shown that we can’t handle it ourselves.”

Icelanders, whose per capita gross domestic product is the fifth highest in the world, according to the United Nations 2007/2008 Human Development Index, will have to tighten their belts.

Shoppers are paying more for the goods they do get. The cost of fruits and vegetables, nearly all of which are imported, have gone up about 50 percent in recent months, said Steinunn Kristinsdottir, a 33-year-old Reykjavik resident who was leaving the Bonus store with her cart full.

“This situation really has been a bit troubling for people,” she said. “They don’t know what’s going to happen.”

To contact the reporter on this story: Chad Thomas in Reykjavik, Iceland, via the Helsinki newsroom at cthomas16@bloomberg.net.