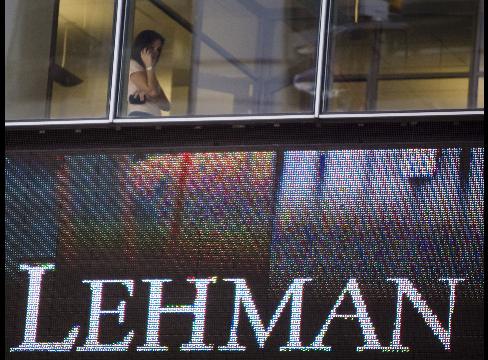 A woman speaks on a cell phone inside the headquarters of Lehman Brothers Holdings Inc., in New York, on Sept. 15, 2008. Photographer: Jeremy Bales/Bloomberg News

Oct. 10 (Bloomberg) — Sellers of credit-default protection on bankrupt Lehman Brothers Holdings Inc. will have to pay 91.375 cents on the dollar to settle the contracts, setting up the biggest-ever payout in the $55 trillion market.

An auction to determine the size of the settlement on Lehman credit-default swaps set a value of 8.625 cents on the dollar for the debt, according to Creditfixings.com, a Web site run by auction administrators Creditex Group Inc. and Markit Group Ltd. The auction may lead to payments of more than $270 billion, BNP Paribas SA strategist Andrea Cicione in London said.

While the potential payout is higher than 87 cents on the dollar suggested by trading in Lehman’s bonds yesterday, sellers of protection have probably written down their positions and put up most of the collateral required, said Robert Pickel, head of the International Swaps and Derivatives Association. More than 350 banks and investors signed up to settle credit-default swaps tied to Lehman. No one knows exactly who has what at stake because there’s no central exchange or system for reporting trades.

“I don’t think it buries anybody,” said Brian Yelvington, a strategist at CreditSights Inc., a bond research firm in New York.

Sellers are required to post collateral, or pledge assets, to the buyer of protection, known as the counterparty, on the other side of the trade if the value of their positions declines. Because Lehman’s bonds had already fallen, that collateral has probably been posted, Yelvington said.

Hedge funds, insurance companies and banks typically buy and sell credit protection, which is used either to insure a bond against default or as a bet against the company’s ability to pay its debt.

The payments “are insignificant when put into the context of the trillions of dollars of payments that are made through settlement systems each and every day,” Pickel said on a conference call with reporters today.

Some funds may be forced to dump assets to meet the payment demands if they haven’t hedged, BNP Paribas’s Cicione said.

“Banks can go to the Federal Reserve, or use the commercial paper market where it is still functioning” to meet protection payments, said Cicione, who said a 9.75 cent recovery rate would lead to payments of about $270 billion. “But fund managers or hedge funds, once they’ve used their cash, have only one option: to sell assets.”

The Pimco Total Return Fund, with about $130 billion under management, has written protection on a face amount of $105.4 million of Lehman debt as of June 30, according to regulatory filings. Pimco spokesman Mark Porterfield didn’t immediately return a call seeking comment.

A unit of Primus Guaranty Ltd., a Bermuda-based company that has sold more than $24 billion in credit-default swaps, said last month it guaranteed $80 million of Lehman debt. The firm sold protection on $215 million of Fannie and Freddie debt and $16.1 million on WaMu. Yesterday, it said it also had made bets of $68.2 million on Kaupthing Bank hf, which the Icelandic government seized.

Primus said last week it had $820 million in cash and liquid investments to meet claims on the contracts. The stock was halted from trading on the New York Stock Exchange yesterday after falling to 99 cents. The shares, down 90 percent this year, slumped 20 cents, or 22 percent, to 70 cents at 3:52 p.m.

The failures of Lehman, once the fourth-largest securities firm, and Seattle-based Washington Mutual Inc. as well as the government takeovers of Fannie Mae, Freddie Mac and Iceland’s biggest banks have provided the 10-year-old credit-default swaps market with its biggest test to date. The use of credit derivatives has grown more than 100-fold in the past seven years as investors began using the swaps to bet on companies’ creditworthiness.

The Federal Reserve Bank of New York is meeting with credit swap dealers and exchanges today to expedite efforts for a market clearinghouse that would reduce risks and absorb counterparty losses resulting from the failure of market makers such as Lehman.

“CDS contracts did not cause any firm to fail,” Pickel said. “The underlying cause of problems that has affected firms is the risk that they chose to take on.”

Credit-default swaps are financial instruments that can be based on bonds and loans. They pay the buyer face value in exchange for the underlying securities or the cash equivalent should a borrower fail to adhere to its debt agreements.

Five-year credit-default swaps on Lehman rose as high as 790 basis points before the firm filed for bankruptcy, according to Phoenix Partners Group., a New York-based inter-dealer broker. A basis point on a credit-default swap contract protecting $10 million of debt from default for five years is equivalent to $1,000 a year.

Dealers earlier this week set values for bonds of Washington-based Fannie Mae and Freddie Mac of McLean, Virginia. Sellers who signed up for the auction will pay 8.5 cents on the dollar at most because the government is backing the debt of the two largest mortgage-finance companies.

The CDOs pool the swaps and then sell off pieces with varying risk.

Standard & Poor’s has ratings on 1,889 CDOs that sold credit-default swap protection on Lehman, the New York-based ratings firm said last month. Pieces of 1,526 CDOs sold protection on Washington Mutual, S&P said. More than 1,200 made bets on both Fannie and Freddie.

The Icelandic banks that failed this week were also often included in CDOs created during 2006 and 2007, according to Sivan Mahadevan, a New York-based Morgan Stanley strategist.

To contact the reporters on this story: Shannon D. Harrington in New York at sharrington6@bloomberg.net; Neil Unmack in London nunmack@bloomberg.net