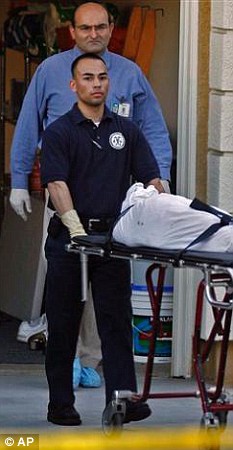 Tragedy: A coroner’s assistant brings out a body

A businessman gunned down five members of his family then shot himself after seeing his family’s fortune wiped out by the stock market collapse.

Karthik Rajaram, 45, who had made almost £900,000 on the London stock market, shot his wife, three children and mother-in-law in the head before turning the gun on himself at the family home near Los Angeles.

He was found with the gun still in his hand.

In a suicide note to police, he blamed the killings on financial hardship brought on by a collapse in shares.

Los Angeles Police Deputy Chief Michael Moore said: ‘The source of it appears to be a financial state, a crisis that this man became embroiled in that has unfolded over the past weeks.

‘We believe he has become despondent recently over financial dealings and the financial situation of his household and that this is a direct result of that.

‘This is a perfect American family behind me that has absolutely been destroyed,’ he added. ‘It is critical for us to step up and recognise we are in some pretty troubled times.’

Using a handgun bought on 16 September, Rajaram went from room to room, picking off the family one-by-one.

Police found his motherinlaw, Indra Ramasesham 69, dead in bed on the first floor. Upstairs, they found his 19-year-old son, Krishna, who was studying business economics, murdered in his bed.

Rajaram’s wife Subasri, was found in another room, also apparently shot while sleeping. In an adjoining room, his 12-year-old son, Ganesha, was dead on the f loor, and his brother, Arjuna, seven, was killed in bed. Their father’s body was in the room with the gun in his hand.

All had been shot in the head.

They were murdered some time between Saturday night and yesterday morning. The alarm was raised when Mrs Rajaram failed to turn up for work at a local chemist.

Mr Rajaram, originally from India, left two suicide notes as well as a will at the home in Sorrento Pointe, a gated community in the Santa Susana Mountains.

Rajaram wrote of two options: committing suicide or killing himself and his entire family. “He talked himself into the second strategy,” said Mr Moore, “That would be the honourable thing to do.” 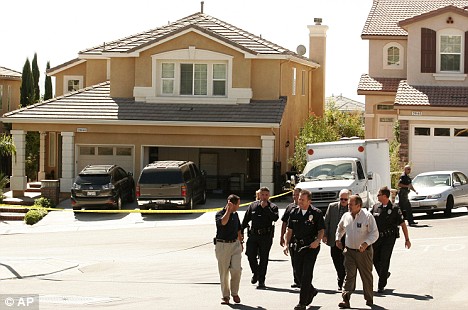 A source said Rajaram had acted after seeing “his finances wiped out by the stock market collapse”.

In 2001, Rajaram had received £875,000 for an initial £12,500 stake in an internet company he co-founded and subsequently floated on the London stock market.

He had previously worked in LA for London-based PricewaterhouseCoopers and spent five years at Sony Pictures.

Police said he had been jobless for several months, but wouldn’t specify what  type of financial problems he was having.

The deaths are thought to have happened on Saturday night at the family home in  Sorrento Pointe, a gated community tucked in the foothills of the Santa Susana  Mountains in Porter Ranch, about 23 miles northwest of Los Angeles.

The family rented the home, according to the owner, who did not want to be identified. She said the family is of Indian descent.

‘They were a very nice family,’ she said. ‘We had no indications anything was wrong.’

Neighbours were stunned at the tragedy. ‘It’s very quiet here,’ said Ryan Ransdell, who lives across the street. ‘That’s what’s so shocking about this. You’d think someone would have heard it. You can hear a car door shut at night.’

Many people have lost their jobs in recent month in the United States which, like many other countries, is struggling with a growing financial crisis. A  government report last week said American employers cut 159,000 jobs in  September, a ninth straight month of falling employment.

The tragedy just came days after a 90-year-old Ohio woman tried to commit  suicide because the home she had lived in for nearly 40 years was being  repossessed.