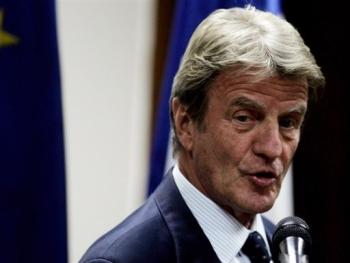 A nuclear weapon will not give Iran ‘immunity’ from an Israeli strike, Kouchner warned

“I honestly don’t believe (a nuclear weapon) will give any immunity to Iran,” Kouchner said in an interview conducted in English with Israel’s Haaretz newspaper during a two-day visit to the region.

“First, because you will hit them before. And this is the danger. Israel has always said it will not wait for the bomb to be ready. I think that (the Iranians) know. Everyone knows.”

The newspaper’s print edition quoted Kouchner as saying that Israel would “eat” Iran, but in a written statement the foreign minister said he had used the word “hit,” and that he regretted any “phonetic confusion”.

Kouchner told Haaretz he hoped tough diplomacy and sanctions would persuade Iran to halt its uranium enrichment programme, which Israel and many Western countries believe is aimed at developing nuclear weapons.

Iran has always insisted its atomic drive is entirely peaceful. Israel is widely regarded as the only nuclear armed state in the Middle East but it has never confirmed or denied having an arsenal.

Kouchner met outgoing Prime Minister Ehud Olmert and Foreign Minister Tzipi Livni — who is trying to form a new coalition government to succeed Olmert’s administration — and was to return to Paris later Sunday.

France currently holds the rotating presidency of the European Union, which has been sponsoring Israeli-Palestinian peace talks as part of the Middle East Quartet, which also includes the United States, the United Nations, and Russia.

Kouchner told reporters he was “optimistic” about the peace process following his talks with Palestinian and Israeli officials and said there was a “very positive vision of peace” on the Israeli side.

On Saturday, Kouchner toured the West Bank town of Jenin, the focus of a months-old Palestinian security crackdown that has been praised by Israel and the United States, and met Palestinian president Mahmud Abbas.

Kouchner encouraged both sides to press ahead with the peace talks, which were formally relaunched last November, but said they were unlikely to meet their stated goal of a comprehensive agreement by the end of this year.