The US Congress is going to take another stab at passing the gigantic bank bailout package on Friday. But how much money are we talking about? SPIEGEL ONLINE gives you an idea. 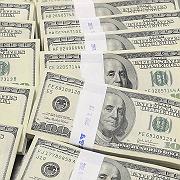 $700 Billion. What else could be done with all those zeros? We have some ideas. (AFP)

Money makes the world go round — and certainly with $700 billion — that’s $700,000,000,000 — you could accomplish a great deal. That’s how much the US government wants to pump into the financial system in order to avoid another bankruptcy on the scale of Lehman Brothers.

The deal stumbled in the House of Representatives on Monday, leading immediately to a steep stock exchange fall in New York and markets around the world. Now, though, after a bit of tinkering, Congress has been asked to vote again. The Senate has already given “Bailout Package: The Sequel” its seal of approval with the House set to vote again on Friday.

But just how much money are we talking about here? Most folks’ eyes get glassy once the number of zeros gets up above six. As a public service, SPIEGEL ONLINE has come up with a list of other things one could possibly do with $700 billion, were it lying around.