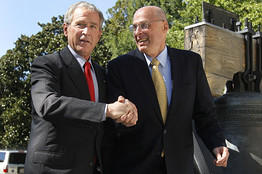 Mr. Bush welcomed the passage of a rescue plan, saying it will help the nation’s economy withstand the financial turmoil. The legislation is “essential to helping America’s economy weather the financial crisis,” said the president, giving a brief statement outside the White House.

Mr. Bush acknowledged widespread concern about using taxpayer money to bail out wealthy bankers, but said the ultimate cost will be “far less” than the initial government outlay, since the plan is to sell the toxic assets back into the market once it recovers.

But he warned that “Americans should also expect that it will take some time for this legislation to have its full impact on our economy.”The 263-171 vote was a reversal from Monday, when House lawmakers shocked investors and their own leaders by voting against a more narrow version of the plan to buy up distressed assets from financial institutions. That vote sent financial markets tumbling and forced the Bush administration and congressional leadership to scramble and salvage the rescue plan.

The result: a $700 billion bailout for financial firms combined with $152 billion in unrelated tax breaks and broader tools for federal regulators to deal with the growing economic crisis. The Senate passed the bill with a strong, bipartisan tally of 74-25 Wednesday evening.

The vote in the House was closer, in part a reflection that lawmakers are less than five weeks away from federal elections and voters are increasingly focused on the economy. Supporters of the rescue plan in recent days made a concerted effort to draw a line between Wall Street’s woes and the concerns of everyday taxpayers.

“We must pass this legislation to stop the hemorrhaging,” Majority Whip James Clyburn (D., S.C.) said in a floor speech, calling the legislation not about Wall Street but about the grocery stores, community banks and other local businesses facing economic hardship.

“We’re in the midst of a recession. It’s going to be a rough ride, but it’s going to be a whole lot rougher ride if we don’t pass this bill today,” House Minority Leader John Boehner (R., Ohio) said on the House floor.

The latest evidence came in California, where Gov. Arnold Schwarzenegger warned Secretary Paulson the state might need an emergency federal loan of up to $7 billion within weeks. California is among several states frozen out of the bond market by the credit crunch and is running out of cash to fund day-to-day government operations.

Those concerns were enough for lawmakers such as Rep. John Lewis (D., Ga.), who said on the floor that he was switching his vote and favoring the bill. Lewis is a key member of the Congressional Black Caucus, which had expressed extreme discomfort with the bill earlier in the week.

He was joined by the likes of Rep. Hilda Solis (D., Calif.), who voted “no” on Monday on the rescue plan but said Friday she would support the bill “with a heavy heart.”

“I am now looking and supporting the rule [for floor debate] and the bill,” she said on the House floor. She said Congress needs to “restore trust” in the financial markets and cap executive compensation.

A number of lawmakers said phone calls from constituents over the last few days have shown a dramatic shift toward broader support of the rescue plan. Specifically, lawmakers cited Monday’s 778-point drop in the Dow Jones Industrial Average as having highlighted the risk to retirement accounts and other consumer investments if Congress failed to act.

“The costs of inaction are greater than the costs of this bill,” Rep. Zach Wamp, (R., Tenn.) said Friday in announcing he would switch his “no” vote to support the measure.

Still, not everyone was happy. Some conservative Democrats expressed concern that the tax breaks in the Senate-authored bill weren’t offset, while their GOP counterparts balked at the dramatic federal intervention in the private markets.

In addition to the rescue plan and tax provisions, other provisions include long-sought language compelling insurers to offer coverage for most mental illnesses at comparable rates to physical illnesses.