Related:
“An open, competitive, and liberalized financial market can effectively allocate scarce resources in a manner that promotes stability and prosperity far better than governmental intervention,” Paulson said 18 months ago. 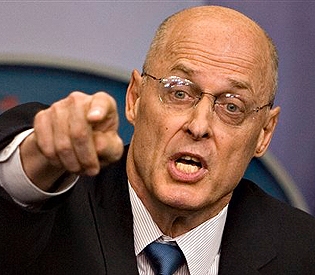 The mystery has been solved

For nearly a year, we have been asking ourselves why the investors and foreign banks that bought up hundreds of billions of dollars of worthless mortgage-backed securities (MBS) from US investment banks have not taken legal action against these same banks or initiated a boycott of US financial products to prevent more people from getting ripped off?

Now we know the answer. It’s because, behind the scenes, Henry Paulson and Co. were working out a deal to dump the whole trillion dollar mess on the US taxpayer. That’s what this whole $700 billion boondoggle is all about; wiping out the massive debts that were generated in the biggest incident of fraud in history.

Rep Brad Sherman explained it like this last night to Larry Kudlow:

“It (The bill) provides hundreds of billions of dollars of bailouts to foreign investors. It provides no real control of Paulson’s power. There is a critique board but not really a board that can step in and change what he does. It’s a $700 billion program run by a part-time temporary employee and there is no limit on million dollar a month salaries……. It’s very clear. The Bank of Shanghai can transfer all of its toxic assets to the Bank of Shanghai of Los Angeles which can then sell them the next day to the Treasury. I had a provision to say if it wasn’t owned by an American entity even a subsidiary, but at least an entity in the US, the Treasury can’t buy it. It was rejected.

The bill is very clear. Assets now held in China and London can be sold to US entities on Monday and then sold to the Treasury on Tuesday. Paulson has made it clear he will recommend a veto of any bill that contained a clear provision that said if Americans did not own the asset on September 20th that it can’t be sold to the Treasury. Hundreds of billions of dollars are going to bail out foreign investors. They know it, they demanded it and the bill has been carefully written to make sure it can happen.”

So, why hasn’t the Treasury Secretary explained the real purpose of the bailout to the American people? Could it be that he knows that his $700 billion bailout would end up like the Hindenburg, vanishing in sheets of flames?

This is a terrible bill, and it confers absolute authority on one of the central players in the scandal, Henry Paulson, who was the Chairman of Goldman Sachs at the time this MBS garbage was being peddled around the planet to credulous investors. Now Paulson will be in a position to buy up any “troubled asset” he that he believes could pose a threat to “financial market stability”. That’s just great! It is clear that Paulson will use his unchecked powers to wipe the slate clean and remove any possibility that foreign investors will take legal action against the real perpetrators; the giant Wall Street investment banks.

So, how do the American people like paying off Paulson and Co. future legal bills? Is that how taxpayer revenue should be spent instead of on education, health care and infrastructure?

There’s another reason why Paulson is working so hard to pass the Bailout for Tycoons Bill; it’s a windfall for the banking giants. Citi did not simply pick up Wachovia by happenstance nor did JP Morgan purchase Washington Mutual because it wanted to perform its civic duty and prevent a full-system meltdown. No way; they were clearly aware of the way the wind was blowing. In fact, neither case manages to pass the smell test.

This is from AP’s Sara Lepro:

“Citigroup agreed Monday to purchase Wachovia’s banking operations for $2.1 billion in a deal arranged by federal regulators, making the Charlotte-based bank the latest casualty of the widening global financial crisis.

The deal greatly expands Citigroup’s retail franchise-giving it a total of more than 4,300 U.S. branches and $600 billion in deposits-and secures its place among the U.S. banking industry’s Big Three, along with Bank of America Corp. and JP Morgan Chase & Co.

But it comes at a cost: Citigroup Inc. said it will slash its quarterly dividend in half to 16 cents. It also will dilute existing shareholders by selling $10 billion in common stock to shore up its capital position.
In addition to assuming $53 billion worth of debt, Citigroup will absorb up to $42 billion of losses from Wachovia’s $312 billion loan portfolio, with the Federal Deposit Insurance Corp. agreeing to cover any remaining losses. Citigroup also will issue $12 billion in preferred stock and warrants to the FDIC.

(Ed; Here’s the punch line) “The government’s proposed $700 billion rescue plan for financial institution, being voted on Monday by the House of Representatives, likely will prove of added benefit to Citi.

While the plan broadly aims to prevent banks from profiting on the sale of troubled assets to the government, there is an exception made for assets acquired in a merger or buyout, or from companies that have filed for bankruptcy. This could allow Citigroup to sell toxic mortgages and other assets it gained from Wachovia for a higher price than the bank actually paid for them.” (“Citigroup to buy Wachovia banking operations”

Huh?!? So Citi not only gets an army of depositors (the cheapest capital available!) but, at the same time, is going to be able to dump it’s mortgage-backed junk on the taxpayer? And, guess what? The JP Morgan deal looks nearly identical.

Is this “insider baseball” or not?

Does anyone want to wager that G-Sax will also get a privileged spot at the public trough sucking up billions of taxpayer dollars to patch together its tattered balance sheet?

And what will the net result of Paulson’s Bailout for Fraudsters be; more consolidation of the financial industry and the utter annihilation of local and regional banks. That’s a sure thing. The mom and pop banks across the country are going to take it in the stern sheets if this bill is passed. Bet on it.

The country has no time for this cynical scavenger-hunt. The system is listing badly and we have ONE chance to get this emergency bill right. There is no way an industry rep like Henry Paulson, who has spent his entire career feathering his own nest and handing out plums to his buddies, can operate in the best interests of the American people. Paulson has got to go!

According to Bloomberg News , Sept 29:

“The Federal Reserve will pump an additional $630 billion into the global financial system, flooding banks with cash to alleviate the worst banking crisis since the Great Depression. The Fed increased its existing currency swaps with foreign central banks by $330 billion to $620 billion to make more dollars available worldwide. The Term Auction Facility, the Fed’s emergency loan program, will expand by $300 billion to $450 billion. The European Central Bank, the Bank of England and the Bank of Japan are among the participating authorities.

The crisis is reverberating through the global economy, causing stocks to plunge and forcing European governments to rescue four banks over the past two days alone.” (Bloomberg)

Get it? The Fed has ALREADY brushed aside Congress’s “No” vote and pumped money into the system; and look what happened.

Libor is still at historic highs, the Ted spread has widened to record levels and interbank lending is grinding to a standstill. There’s a run on the money markets that is reducing the ability of businesses to turn over short term debt. The system is shutting down, folks, and Paulson’s snake oil won’t help. Why throw another $700 billion down a rathole? 400 reputable economists–not the “faith based” industry hacks that work for the Bush administration–are opposed to this bailout. It has to be stopped.

This is a “real time” meltdown and it requires real solutions, not bailouts for foreign creditors and Wall Street Goliaths. (Foreign victims of this scam will have to sue the perpetrators not the US taxpayer) As Nouriel Roubini, chairman of Roubini Global Economics, points out, we are on the verge of the “mother of all bank runs”, a cross-border savaging of reserves that would crash the entire financial system. Here’s Roubini on the next shoe to drop:

“The next step of this panic could become the mother of all bank runs, i.e. a run on the trillion dollar plus of the cross border short-term interbank liabilities of the US banking and financial system as foreign banks as starting to worry about the safety of their liquid exposures to US financial institutions; such a silent cross border bank run has already started as foreign banks are worried about the solvency of US banks and are starting to reduce their exposure. And if this run accelerates – as it may now – a total meltdown of the US financial system could occur. We are thus now in a generalized panic mode and back to the risk of a systemic meltdown of the entire financial system. And US and foreign policy authorities seem to be clueless about what needs to be done next. Maybe they should today start with a coordinated 100 bps reduction in policy rates in all the major economies in the world to show that they are starting to seriously recognize and address this rapidly worsening financial crisis.” (Nouriel Roubini’s EconoMonitor)

We have no time for Paulson’s self serving shenanigans. This is not how one goes about recapitalizing the banking system or bringing stability to the financial system. It’s time to get rid of the lobbyists and banking vermin and bring in the economists and the people with real experience. Paulson’s plan is loser. Not one dime should go to this latest Wall Street swindle. No bailout!