Fearing a loss of funding over the weekend, the FDIC forced the sale. 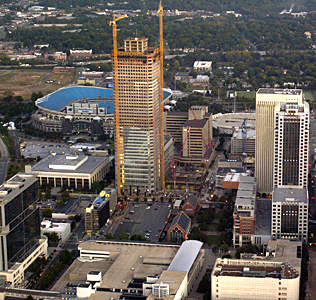 On Friday, with its stock plunging 27 percent, Wachovia experienced a “silent run” on deposits, but the bigger worry for regulators was that other banks wouldn’t provide the Charlotte bank with necessary short-term funding when it opened for business Monday, sources familiar with the situation told the Observer.

With Wachovia already looking for a merger partner, the Federal Deposit Insurance Corp., in consultation with other regulators, required the bank to reach a sale to Citigroup on Monday morning.

The FDIC, for the first time, used legislative authority created in 1991 to help it deal with a “very large complex bank failure” on short notice. It requires approval from heavy hitters – two-thirds of FDIC board members, two-thirds of Federal Reserve board members as well as the Treasury secretary, who must consult with the president.

“When Wachovia opened Monday it would not have had a source of liquidity,” a source familiar with the situation said. “It really could not have opened under those circumstances. That’s why (the FDIC) put together the assistance package.”

The new details show the precarious situation Wachovia faced over the weekend as it rushed to find a suitor, even as Congress debated a possible bailout plan. Intense negotiations in New York included a decision by Wells Fargo to pass on a deal Sunday and frequent consultations with the Office of the Comptroller of the Currency, the bank’s primary regulator, and the FDIC, sources said. In the end, the FDIC, which insures customer deposits, forged the deal because it has “the pocketbook,” a source said.

In the resulting agreement, Citigroup agreed to buy Wachovia’s banking operations and most of its assets, with assistance from the FDIC. The agency will pick up losses above $42 billion on a $312 billion loan book in exchange for $12 billion in Citi securities.

Inside Wachovia, executives started noticing customers withdrawing money on Friday morning, following the failure of Washington Mutual on Thursday. “The so-called silent run on the bank – it’s real,” Carlos Evans, Wachovia’s wholesale banking executive, said in an interview. “When Congress failed to pass the ($700 billion bailout) proposal, when WaMu collapsed, you could see the money flowing. My computer screen was lighting up.”

Starting Friday morning, Evans said, businesses and institutions with large accounts started withdrawing money to lower their balances to below the federally insured $100,000 limit. They weren’t closing accounts, he said, adding “they were very apologetic in saying they love the service they get from Wachovia and they weren’t leaving Wachovia. They were just moving their money until things settled down.”

Money flowed out of Wachovia throughout the weekend, said Evans who heard anecdotes and received memos and BlackBerry messages from bank employees in the field.

“What happened last week, and it literally happened that fast …You could go from being OK, hurt, weakened, there’s no question the company was weakened… but you go from being weakened to in trouble in a matter of days,” he said. “I don’t think people understand how quickly events unfolded.”

The FDIC and the OCC declined to comment on whether the bank experienced a run on deposits. However, FDIC spokesman David Barr said it wouldn’t be surprising. “When a bank in the news is rumored to be in trouble that does prompt a lot of depositors to take a second look at their deposits,” he said.

Wachovia had $448 billion in deposits at the end of June. Spokeswoman Christy Phillips-Brown said the bank updates the number only as part of quarterly earnings reports but added: “Depositors should have full confidence in Wachovia.” In announcing the Citi transaction Monday, FDIC chairwoman Sheila Bair said Wachovia customers had “full protection of all of their deposits.”

Wachovia’s loss of deposits Friday was enough to catch the attention of the OCC, sources said. The WaMu failure as well as mounting speculation that Wachovia was for sale – it had been in earlier talks with Morgan Stanley – contributed to the run. By Friday afternoon, news leaked that Wachovia was talking to Citi and Wells Fargo.

San Francisco-based Wells, a major West Coast retail bank, was the front runner but decided to pass because officials were worried about a piece of Wachovia’s commercial loan portfolio, one of the sources said. By then, regulators were worried that Wachovia would not be able to access the funding it needed on Monday. “Banks are not lending to each other” in turbulent markets, and if more depositors withdrew money on Monday, it could need cash to meet its obligations, the source said. “It’s a confidence issue.”

During merger discussions, Wachovia officials, working in New York, frequently consulted with regulators, often in lengthy conference calls. Comptroller John Dugan, who presides over the OCC, worked late into the night Sunday in Washington. He had returned Friday from Europe, skipping a meeting of an organization called the Financial Stability Forum in Amsterdam.

The FDIC became more heavily involved as the weekend progressed because of its role in protecting consumer deposits. For the first time, the agency triggered a “systemic risk exception” under the 1991 law that allows it to ignore a requirement to choose the “least costly” method for resolving a failing bank.

After a vote by the FDIC board on Monday morning, Wachovia chief executive CEO Bob Steel received word of the decision and concurred. The FDIC issued a press release at 8:17 a.m.

“During recent weeks, the financial landscape has changed significantly and presented us with unprecedented challenges,” Steel said in a statement Monday. “Today’s announcement is the best alternative for the company.”

The transaction essentially breaks apart the Charlotte bank, leaving behind a holding company called Wachovia that will house brokerage and asset management businesses. The deal threatens thousands of Wachovia jobs because of Citi’s planned cost cuts and leaves shareholders with a much smaller institution. Because of the hurried nature of the negotiations, the merger agreement still hasn’t been finalized. Wachovia shareholders and the Federal Reserve still must approve it.

Asked why the FDIC could not have provided assistance to Wachovia without Citi’s involvement, FDIC spokesman Barr said he couldn’t comment on the transaction. But he noted that Wachovia had already been in merger talks and that FDIC assistance is usually provided in conjunction with a deal.

Evans, the Wachovia executive, said Steel had no choice but to do the Citigroup deal, adding he thinks the New York banking giant will be a “strong partner.” He touted Citigroup’s huge international deposits saying: “If you think about liquidity being key in this kind of environment, this diversification of deposit base is a big plus.”

On how the situation is affecting him personally, Evans said: “It’s tough. To have your whole life change in a matter of literally a couple of weeks, not even weeks, a weekend, is tough.”