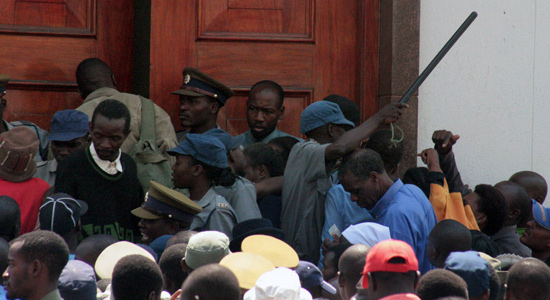 At a bank in Harare, Zimbabwe, this week, the police directed customers trying to withdraw their nearly worthless savings. (Associated Press)

HARARE, Zimbabwe: Long before the rooster in their dirt yard crowed, Rose Moyo and her husband rolled out of bed. “It is time to get up,” intoned the robotic voice of her cellphone. Its glowing face displayed the time: 2:20 a.m.

They crept past their children sleeping on the floor of the one-room house – Cinderella, 9, and Chrissie, 10 – and took their daily moonlit stroll to the bank. The guard on the graveyard shift gave them a number. They were the 29th to arrive, all hoping for a chance to withdraw the maximum amount of Zimbabwean currency the government allowed last month – the equivalent of just a dollar or two.

Zimbabwe is in the grip of one of the great hyperinflations in world history. The people of this once proud capital have been plunged into a Darwinian struggle to get by. Many have been reduced to peddlers and paupers, hawkers and black-market hustlers, eating just a meal or two a day, their hollowed cheeks a testament to their hunger.

Like countless Zimbabweans, Moyo has calculated the price of goods by the number of days she had to spend in line at the bank to withdraw cash to buy them: a day for a bar of soap; another for a bag of salt; and four for a sack of cornmeal.

The withdrawal limit rose on Monday, but with inflation surpassing what independent economists say is an almost unimaginable 40 million percent, she said the value of the new amount would quickly be a pittance, too.

“It’s survival of the fittest,” said Moyo, 29, a hair braider who sells the greens she grows in her yard for a dime a bunch. “If you’re not fit, you will starve.”

Economists here and abroad say Zimbabwe’s economic collapse is gaining velocity, radiating instability into the heart of southern Africa. As the bankrupt government prints ever more money, inflation has gone wild, rising from 1,000 percent in 2006 to 12,000 percent in 2007 to a figure so high the government had to lop 10 zeros off the currency in August to keep the nation’s calculators from being overwhelmed. (Had it left the currency alone, $1 would now be worth about 10 trillion Zimbabwean dollars.)

In fact, Zimbabwe’s hyperinflation is probably among the five worst of all time, said Jeffrey Sachs, a Columbia University economics professor, along with Germany in the 1920s, Greece and Hungary in the 1940s and Yugoslavia in 1993.

Making matters worse, cash itself has become scarce. Business executives and diplomats say Zimbabwe’s central bank governor, Gideon Gono, desperate for foreign currency to stoke the governing party’s patronage machine, sends runners into the streets with suitcases of the nation’s currency to buy up American dollars and South African rand on the black market – drying up Zimbabwean dollars that would otherwise go to the banks.

Because of the cash shortage, the government strictly limits the amount people can withdraw. Even so, Zimbabweans say they often wait in vain for hours at banks that send their customers away empty-handed.

Gono, who blames Western sanctions for the nation’s troubles, did not respond to requests for an interview, but he has shown few signs of doing anything differently.

“I am going to print and print and sign the money until sanctions are removed,” he told state media this week.

Economists say that the only thing that can halt Zimbabwe’s inflationary spiral is a political solution that takes control over the country’s economy out of the hands of Robert Mugabe, the 84-year-old president who still maintains a viselike hold on power after 28 years in office.

“This is the end of the endgame,” Professor Sachs said.

Mugabe, who lives in splendor here in a mansion hidden behind high walls, returned to Harare on Monday from the United Nations General Assembly meeting in New York. He and the opposition leader, Morgan Tsvangirai, signed a power-sharing agreement, but they are still deadlocked over the division of the ministries. So far, Mugabe has refused to give up control of the crucial Finance and Home Ministries.

Basic public services, already devastated by an exodus of professionals in recent years, are breaking down on an ever larger scale as tens of thousands of teachers, nurses, garbage collectors and janitors have simply stopped reporting to their jobs because their salaries, more worthless literally by the hour, no longer cover the cost of taking the bus to work.

“It’s scary and it’s pathetic,” said Tendai Chikowore, president of the Zimbabwe Teachers Association, the largest and least radical of the teacher unions. She said a teacher’s monthly pay was not even enough to buy two bottles of cooking oil. “This is a collapse of the system, and it’s not only for teachers,” she said. “At the hospitals, there are no nurses, no drugs.”

Those who continue to show up often make a little extra on the job. Teachers sell their students candy and cookies, for example, or accept payment from parents in cornmeal or cooking oil, said Raymond Majongwe, secretary general of the Progressive Teachers Union.

Zimbabweans have a legendary ability to make do despite extraordinary hardship, and the money sent home by millions of their compatriots who have fled abroad to escape political repression and economic deprivation continues to sustain many of them. But the deteriorating conditions are creating pressures for a renewed exodus, even as people employ all their entrepreneurial creativity to stay alive.

Among those thinking of leaving is Fortunate Nyabinde, whose salary of $3,600 Zimbabwean dollars a month (or $36 trillion before the government rejiggered the currency in August) does not even pay for four days of bus fare to her job at Parirenyatwa Hospital, one of Zimbabwe’s leading public institutions.

Yet, for now, she keeps going to work, wheeling a trolley of cornmeal porridge from ward to ward, mostly because she can eke out an extra 20 cents a day by selling basic necessities to patients that the hospital usually does not have in stock: toilet paper, toothpaste, soap.

“If they come to the hospital without anything, they will have to buy from us,” Nyabinde said.

Signs of a Calamity

Clues to the calamitous state of the country can be found even in recent articles tucked into Mugabe’s mouthpiece, The Herald, the only daily newspaper he has allowed to keep publishing.

The bodies of paupers in advanced states of decay were stacking up in the mortuary at Beitbridge District Hospital because not even government authorities were seeing to their burial.

Harare Central Hospital slashed admissions by almost half because so much of its cleaning staff could no longer afford to get to work.

Most of the capital, though lovely beneath its springtime canopy of lavender jacaranda blooms, was without water because the authorities had stopped paying the bills to transport the treatment chemicals. Garbage is piling up uncollected. Sixteen people have died in an outbreak of cholera in nearby Chitungwiza, spread by contaminated water and sewage.

Vigilantes in Kwekwe killed a man suspected of stealing two chickens, eggs and a bucket of corn.

And traditional chiefs complained about corrupt politicians and army officers who sold grain needed for the hungry to the politically connected instead.

Zimbabweans standing in bank lines across the capital offer their own stratagems for survival. At the Avondale shopping center, a strip mall with a café serving cappuccinos and a multiplex showing “Sex and the City,” more than 200 sweaty, grumpy people lined up one recent morning to withdraw whatever they could from the bank.

Moyo, the early riser, had her usual sought-after, low number – 26 – while Nyabinde, the hospital worker on the overnight shift, was far back at No. 148 because she had arrived late – about 5:15 a.m.

No. 132 was Stanford Mafumera, 35, a security guard who spends most of his time at his job or in line at the bank; he is so poor that he sleeps beneath the overhang at the mall rather than pay for bus fare home to his family. His clothes hung loose on his gaunt body, and his dusty shoes were coming apart.

“Since Monday, Tuesday, Wednesday, there was no cash here,” he said. “We started getting cash only yesterday.”

Most days, he said, he eats only a bag of corn nuts to conserve his monthly pay – worth $10 a week and a half ago, but only $5 now because of inflation.

Each day, he buys a pack of cigarettes and sells them one by one, making an extra 20 to 30 cents. But he was unable to afford the cost of taking his 5-year-old daughter to the doctor recently when she got diarrhea after drinking dirty water from an unprotected well.

Mafumera blamed the government’s land reform program for Zimbabwe’s woes. It chased away the white commercial farmers who had made the country a breadbasket, he said, as well as donors from Britain and other European countries and the United States who sustained Zimbabwe’s starving millions for years.

“A lot of people got farms, but they can’t produce anything and this is what is causing the poverty and hunger,” he said. “There’s no food.”

Zimbabwe’s economic unraveling has, indeed, accelerated since the chaotic, often violent invasions of thousands of white-owned farms by Mugabe’s supporters began in 2000. The big farms now produce less than a tenth the corn – the main staple food crop here – of what they did in the 1990s, the United Nations Food and Agriculture Organization reported in June.

In the years since, the country has suffered extreme food scarcity, rampant inflation, a shrinking economy and collapsing public services. In Nyabinde’s neighborhood, every spare spot of ground sprouts the greens people eat with cornmeal porridge, evidence of the scramble for food.

And in a country that used to have an education system that was the pride of the continent, the schools that Nyabinde’s children – Chenai, 10, and Darlington, 6 – attend are now empty of teachers. So she sends them to Stella Muponda, a teacher who quit her public school job last year, for a couple of hours of instruction a day. The money Nyabinde pays Muponda for the children’s lessons is now worth only about 40 cents, enough for a single bread roll.

Muponda, a widow with twin, 14-year-old boys, said she and her sons grew thinner, weaker and more sickly last year, unable to eat enough on her meager pay. When she no longer had the strength for the five-mile walk to and from school, she quit.

Gaunt and exhausted, she kept saying, “I only wish I could get a decent job.”